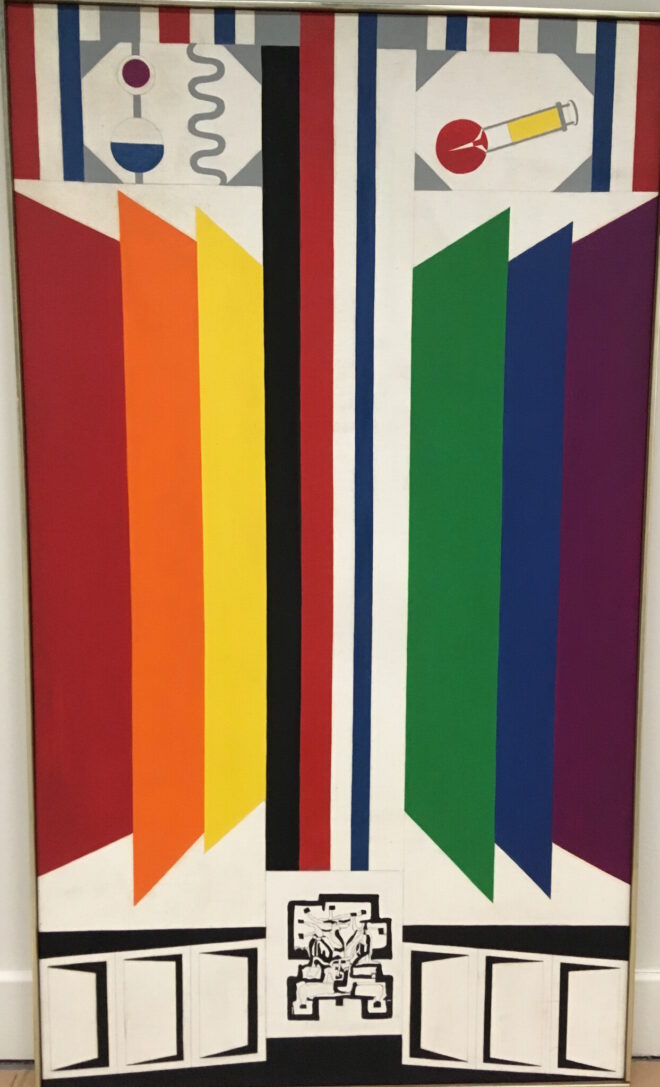 It’s difficult to rest on specific thematic suggestions in any of her works, as Mary Ascher never received any critical attention in regards to her painting practice. This means that we, the viewers, have to work with what is available. Mary Ascher’s series, Corridor of Power, combines hard-edge architecture, political iconographies, scientific materials, and elements of abstraction to give a glimpse into the multifacet social activities of the 1960s in the United States. The title suggests an entrance (corridor) to control (power). Within these entrances are specific concentrations (i.e. science, ideologies, communication). This moment in history wasn’t simple. Ascher’s series taps into both the positive and negative activities from this time. Corridor of Power: Science II features test tubes and other objects associated with laboratory activities. The 20th century was a time of great technological advancements. Although there is no evident narrative within the architectural makeup of the painting, a light-hearted feeling of innovation transpires. This painting combines trends of cubism, precisionism, and flat plains of abstraction. A Technicolor shuttering of colors occupies the center of the work, offering viewers a sensation of advancement. The painting, although physically static, evokes movement. Technicolor, in its third iteration, brought juicy, saturated tones onto the television sets of America; think of the rich colors that live within the Wizard of Oz. Given the timing of this work’s creation, I believe the imagery, precise color choices, and title suggest that an investment in science leads to an obtainment of power.

Not much has been written about Mary Ascher, other than her being born in Leeds, London in 1900 and having died in New York in 1988. However, maybe we can discern her inspiration for the painting series by looking closer at the precise use of colors and lines. After all, Edvard Munch, who excelled in physics and chemistry, was her muse.

In addition to bold vertical blocks of color, Ascher places scientific apparatus near the head of work incased in a white frame. We can assume that this is to highlight the purpose of the work. There are thick red, white and blue lines that occupy the middle, with black and white lines on either side. The periphery colors are bold and may symbolize corridors. They are inviting to the viewers eyes and can tempt the viewer to discover what is behind them. The red, white and blue pattern is repeated at the top, as an anchor. Is that a subtle indication that America is central to all things scientific? Or perhaps is it a critique of America at the core of power, direction and discovery?

It is unclear what the bottom image is, but it resembles a puzzle piece. The images on either side mimic a staircase possibly indicating the descension or ascension of power, of course depending on the observer’s perspective.