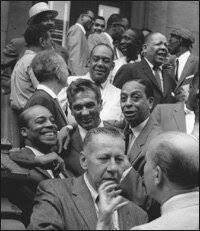 Born in 1910 in Vicksburg, Mississippi, Milton Hinton was one of the most influential American jazz double bass players of the last century. He spent most of his career performing with all the major American jazz artists of his time. A dedicated photographer, he was one of the 58 jazz musicians featured in the January 1959 Esquire Magazine issue “The Golden Age of Jazz.”

This picture was taken on August 12, 1958, around 10 am, on the outdoor steps of a Harlem townhouse on 17 East 126th St. Seen here are some of the most influential jazz musicians of that era. They are greeting each other while getting ready to pose for Esquire. “A Great Day in Harlem,” the final editorial photograph by Art Kane, was featured in the January 1958 Esquire issue, and it became a milestone document of the Golden Era of American Jazz.

In the 1994 Jean Bach documentary film “A Great Day in Harlem,” Milton Hinton explains why this shot is particularly meaningful to him. In the middle of it, there are three of the most influential drummers of his Jazz era: Jo Jones, Gene Krupa, Sonny Greer. In their smiles, I see all the camaraderie and enjoyable dialogues upon which the greatest jazz music emerged.