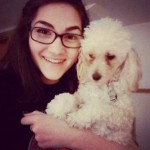 Stephanie with her poodle, Daisy.

NEW YORK—“Words are so great; writing is amazing!,” a passionate 19 year old said as she held on to her pen and notebook, reflecting on her dreams of becoming a writer.

Born and raised in Brooklyn, Stephanie Kotsikonas spent her childhood years wondering what she would be when she grew up: an archeologist, a veterinarian, or a forensic anthropologist. “I went through a whole span of things I wanted to be,” adding, “I knew I didn’t want to be stuck behind a cubicle all day!”

Throughout her childhood, Kotsikonas was always writing; it was something she loved to do. “But no one had ever told me I was a good writer,” she said.

“I was lost; I didn’t know what I wanted to do,” Kotsikonas said as she reflected on her early years. In the eighth grade, however, she earned a writing award. She brought this skill with her to high school where she worked for the school’s newspaper. “I wrote a running series on the ‘60s,” adding, “I love the ‘60s.” Her passion and skill awarded her yet another writing recognition in high school. “I thought, ‘Maybe I can do something with this,’” Kotsikonas said, coming to the realization that writing is both a skill and a passion of hers.

Kotsikonas’ talent and love for the trade solidified her plans of becoming a writer; she is now pursuing a journalism degree as an honors student at Baruch College. She thrives on the freedom of “literary” and “narrative” writing. “As long as you’re grammatically correct, there are no rules,” she said with a wide smile and sparkle in her eye.

When asked if she has encountered any challenges on her path to becoming a writer, Kotsikonas said, “I am too hard on myself,” adding, “I illogically compare myself to bigger writers.”

Although Kotsikonas is quick to choose “literary” and “narrative” writing as her favorite genres, she also enjoys writing about human rights.

In addition to writing, Kotsikonas said she “love[s] to travel” and has considered a career as a travel writer. After attending Greek school for 7 years as a child, Kotsikonas can now speak and write in the language of her home country. As she completes her journalism degree at Baruch, Kotsikonas hopes to study abroad and is particularly interested in learning German.

“I even know a Beatles song in German!”