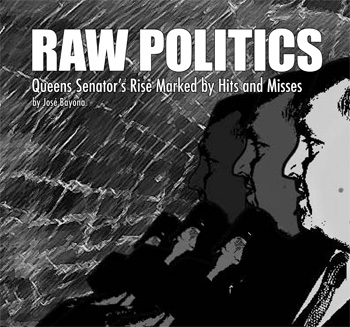 The new New York State Senator Hiram Monserrate is engaged in a two-front battle that could have broad implications for both his career and state government. After beginning to flex his political muscle in Albany, he was indicted in March 2009 on three felony counts and three misdemeanor counts of assaulting his companion, Karla Giraldo, 30.

The indictment was handed up by a Queens grand jury, after Monserrate was accused of attacking Giraldo in December with broken glass at his home in Jackson Heights. Monserrate has pleaded not guilty and says he fell while bringing her a glass of water.

He could face seven years in prison.

After the indictment, Monserrate temporarily stepped down as chairman of the Senate Consumer Protection Committee. He had previously agreed not to accept the stipend paid to committee chairs until the criminal case is settled.

This is not the only controversy Monserrate has faced recently. In November, he formed an independent caucus, known as the “Gang of Four,” that denied its support to the majority leader of the State Senate, Malcolm Smith, demanding more minority leadership on Senate committees. The maneuver temporarily splintered the Democratic majority in the Senate even before it had finished taking control from Republicans for the first time in 40 years.

The challenge paid quick dividends for Monserrate. Days after he was sworn as a Senator, the Democrats named Monserrate chair of the Senate Consumer Protection Committee.

Monserrate’s willingness to play hardball within his own party is not new. In 2006, while he was a City Councilman for the 21st District, he ran for the Senate as an independent against the incumbent Democrat, John Sabini, for the 13th district in Queens. He lost by 236 votes. Last year, he ran unopposed for the same seat after Sabini resigned following his appointment to the chair of the New York State Racing and Wagering Board.

Monserrate remains a controversial figure. “Hiram is in the State Senate without real support from the community,” says Orlando Tobón, a Colombian-born community leader in Jackson Heights, where he has lived for 40 years and is known by many as “the Mayor of Jackson Heights.”

Tobón, who played himself in the Oscar-nominated 2004 film “Maria Full of Grace,” about young Latinas who are used as drug couriers, is typical of many local constituents who have a love-hate relationship with Monserrate. Tobón is grateful for Monserrate’s work as a two-term Councilman for Jackson Heights, Corona and Elmhurst, and says, “Now we have a voice in Albany, and that matters.”

Yet the relationship between Tobón and Monserrate, whose parents are Puerto Rican, is colored by ethnic rivalries. When he ran for the City Council, Monserrate won the support in retail stores. He also helped to draft the “don’t ask, don’t tell” policy, or Executive Order 41, that allows all residents access to city services regardless of their immigration status.

But what he might be best remembered for by his constituents and many others is his victory over Mayor Michael Bloomberg to have Sunday parking-meter regulations rolled back, reinstating free parking everywhere in the city on Sundays.

“I’m a religious person, as well as many people in Queens, and getting out of church in the middle of the sermon to feed the parking meter was something not pleasant to God,” said Luis Castro, who served as a close adviser to Monserrate and as his community liaison for more than eight years, before quitting that position last May. At the time, Castro called his boss an “egocentric politician”; now he is helping Monserrate defend himself against the assault charges.

Indeed, perhaps no one knows Monserrate better than Castro, 52, who was born in Ecuador. He boasts of helping Monserrate, a member of the Royal Rangers, a Protestant youth group similar to the Boy Scouts, which Monserrate joined at age 12.

“I saw Hiram for the first time in June of 1967 when his mother was eight months pregnant with him,” says Castro. “We have been friends for 41 years.”

Monserrate, 41, was raised in Chelsea, on Manhattan’s West Side, but later moved to Bellrose, Queens, with his parents. Monserrate dropped out of high school at 17 to enlist in the Marine Corps; he eventually joined the Police Department for 12 years and earned a bachelor’s degree in political science at Queens College.

Monserrate became the first police officer to be elected to the Board of Directors of the American Civil Liberties Union and was a founding member of the Latino Officers Association. He left the NYPD in 2000 to run for Democratic district leader in Queens and, a year later, for City Council.

Many of those who know Monserrate best assume he has his eyes on higher offices. Castro expects his former boss to run for mayor, and Javier Castaño, editor in chief of the Spanish-language newspaper Hoy before it closed in December, agrees that “Monserrate might see the
State Senate as a springboard for City Hall.”

But Castaño points out this challenge for Monserrate: “In the city, he’s a strong politician, he has power. In Albany, it’s going to be more about diplomacy.”