What periodic element are you?

Which swear word are you?

What kind of kiss are you?

These are just some of the seemingly innocuous questions that appear on thousands of quizzes and similar applications that Facebook members regularly download and answer. But the quizzes are not as innocent as they seem and are raising serious questions about whether quizzes violate Internet privacy and promote identity theft. Under pressure from the American Civil Liberties Union and others, Facebook has recently updated its privacy settings to allow users more control over who sees what information, but the ACLU is demanding even stricter policies. 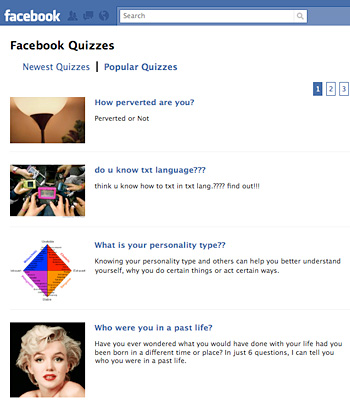 Facebook currently has over 350 million active users. And the social networking site offers more than 500,000 applications, including quizzes, which over 70 percent of Facebook users engage with monthly.

The ACLU is taking on Facebook quizzes, concerned that people may not be aware that developers could access users’ personal information. Anyone can be a quiz developer. “All it takes is an email account,” warns Chris Conley, a Technology and Civil Liberties Fellow at the ACLU in Northern California.

The problem is that many Facebook users appear unaware of just how much private information they unlock when they take a quiz. This seems to be the case, even though, when signing up for a quiz on Facebook, a window opens that reads: “Allow Access? Allowing [name of quiz] access will let it pull your profile information, photos, your friends’ info, and other content that it requires to work.”

Now the ACLU has developed its own quiz to highlight just how much privacy users give up. The ACLU quiz application, “What Do Quizzes Really Know About You?,” gives an inside peak into what a quiz can reveal. After answering each question, the quiz displays what the quiz developer can see.

The first question asks: “When you take a quiz on Facebook, what can the quiz see about you?” The answer: “Almost everything on your profile, even if you use privacy settings to limit access.” Then you are provided with a sampling of information from your profile that is exposed, including groups you belong to, networks (like CUNY Baruch) and events that you have attended. The quizzes even reveal information about friends in your address book, even if they themselves have not taken the quiz.

“You might say ‘I won’t take them, so that makes me safe,'” says Conley. Not true, he says. A quiz has access to friends’ political views, activities, groups, hometown, current location, photos and even birthdates. When taking the ACLU quiz recently, a quiz-taker found that she had unlocked information about a friend, including his birth date, where he lives now and his hometown. That is a lot of personal information.

This also concerns Jay Foley, the Executive Director of the Identity Theft Resource Center. Beyond market research, Foley worries that identity theft could occur by using personal information gathered through quiz applications. “The people who create the quizzes can just be an anonymous email address, saying they live in New York City, but they may be in Nigeria or Russia,” says Foley. Identity theft crimes perpetrated inside the United States, says Foley, are more readily pursued. He worries that identity thieves who operate overseas are harder to catch. Consider the infamous Nigerian email scams as an example of individuals overseas preying on people within the United States.

In fact, about 70 percent of Facebook users today are outside the United States. “That’s one of the negatives about the Internet,” says Foley. “When they say World Wide Web, they’re not kidding.”

Foley worries that if people answer questions in a quiz like “What’s you’re astrological sign,” or “What’s you’re country of birth,” in addition to all the information that is accessed just by taking the quiz, a developer can then steal your identity or get a credit card in your name. Even questions like “What’s your favorite pet’s name?” can be dangerous since the answer is commonly used as a security question for online passwords. “If I’m a mugger, there is a limit to the people I can mug,” says Foley. “But if I’m on the Internet, I can reach the whole world if I do it right.”

While this may sound alarmist, privacy advocates want people to realize how easily private information is accessed online. “We’re trying to raise awareness of issues of online privacy in general,” says Conley. The ACLU also wants Facebook to add a feature to quizzes that will reveal exactly what information is used for so that users can then make the decision to allow access.

Facebook updated its privacy settings, recently, in response to a complaint from the Privacy Commissioner of Canada, which itself was responding to a complaint, last August, from the Canadian Internet Policy and Public Interest Clinic. Facebook’s new settings ask users to review their privacy settings. You can keep the older, looser settings, or use the suggested new settings, which offer several privacy enhancements, including the removal of regional networks (like London or New York City). It also allows users to see who can view a status update, which can be hidden from specific individuals or groups.

The message boards are filled with responses to these changes. Some are happy with Facebook’s initiative. Others, however, are confused, unhappy or have not been prompted to update their privacy. “Should’ve left it like it was,” read one post. “Changing things just made it worse.”

While the new Facebook settings are an improvement, they do not go far enough, according to the ACLU. The ACLU is “glad to see Facebook finally put privacy front and center for every one of its users and hopes other companies will do the same,” says Nicole Ozer, Technology and Civil Liberties Policy Director of the ACLU. But they are concerned that the new changes don’t affect what they call the “app gap”– a reference to a gap in privacy protection.

Facebook has promised to continue to improve its privacy settings to keep users’ information safe.
For now, the ACLU continues to encourage Facebook users to take its quiz. To date, over 115,000 people have taken the ACLU quiz. And as technology becomes an increasing presence in our lives, the importance of vigilance grows. Ariana Romero, 17, had seen the warning that third-party developers will access information to make the quiz work. “But I never really paid attention to it, or thought about it,” she says. After taking the ACLU quiz, she was surprised by the results. Since then, she has become more wary t of taking quizzes and began posting the ACLU quiz on her wall.

“This is today’s issue,” says Conley, “but tomorrow there will be a new issue.”