Working and Shopping on Thanksgiving and Black Friday

Lan Xu photographed New Yorkers who had to work on Thanksgiving Day.

Customers at the Target in East Flatbush Lined Up
for 4 a.m. Doorbuster Sales 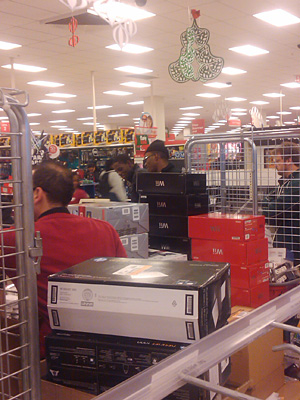 “About 200 people lined up outside and around the store this morning for 4 a.m. doorbusters,” said Josian Butler, first-floor manager at the Target in East Flatbush.

As the doors opened, crowds raced upstairs to the electronics department. LCD TVs and the 8G Ipod Touch sold fastest. This was the first year that this Target had promotional deals for Apple products; at $225 for the 8G Touch, customers snapped up the devices. Thirty-two inch, $200 Vizio flat-screens also flew off the shelves, as did the $199 Nintendo Wii, which came with a free game.

“We were more controlled with store layouts, we paid closer attention to details” than last year, said an electronics manager who gave his name only as Alex, and who explained that the store had set up pallets of inventory in the middle of the aisles for easier access. “It kept the crowds flowing, and congestion in high traffic areas to a minimum.”

“I’ve budgeted a $1,200 spending limit and intend to get my Christmas shopping done today,” said Howard Pellor, 35, one enthusiastic shopper.

A Veteran Black Friday Shopper Returns to the Woodbury Outlets

Black Friday shopping at the Woodbury Commons Premium Outlets in Central Valley, N.Y., has become a tradition for my mother and me for five years. This year, we moved it up and a day.

With the shopping center opening at 9 p.m. on Thanksgiving Day, we left on a 7:15 p.m. bus from Manhattan and got there just before the mall opened. As a veteran holiday shopper, I wasn’t impressed by the size of the crowds; there were still spaces in the parking lot. Although it began to get crowded after midnight, it was never as busy as it was before the recession.

The Woodbury mall has been rated one of the top 10 shopping centers in the world by several fashion and traveling magazines and Web sites. And the biggest crowds formed outside the luxury stores. As usual, it was impossible to get into Coach, the high-end handbag store; the line was ridiculously long from when the mall opened to when I left, around 7 a.m. on Friday. Yves Saint Laurent, Gucci and Betsey Johnson had long lines, too; and there are usually never lines at those stores.

“We’re doing great here,” said an assistant store manager for the Gap who would give her name only as Anna. “We’re expecting better sales than last year.”

Last year on Black Friday, the Gap was virtually a dead zone. This year the crowds are almost back to what they used to be: standing on line for an hour, fighting through the crowds for the best stuff and about an hour on the checkout line that practically wrapped around the entire store.

But I snagged a few bargains: fleece sweaters and sweatpants Gap for $10 each. The store also had women’s puffer coats for $25, compared with $98 on gap.com.

While waiting for the Short Line bus back to Manhattan, I noticed a lady with 10 shopping bags from Coach. Her name was Allison Wrentham, and she was visiting from England. I never made it into Coach, where the lines remained long all through the night, so I asked her what bargains she had found. She said the store was selling wristlets — small pocketbooks that hang from a strap around the wrist–for $50 and many bigger bags for less than $100. The store was also offering 20 percent off on all purchases. Compared with England, she said, these were like wholesale prices.

Needless to say, I was a bit jealous. I can never seem to get into Coach on Black Friday because I refuse to stand on that line when other deals can be had.

One Macy’s, in South Brooklyn, Is Relatively Quiet
as Customers Prefer to Sleep In

As I left my house on Friday at 4 a.m., a hushed stillness hung over the lightly drizzling world. The streets were empty along the scant half-mile to Kings Plaza mall in South Brooklyn. Even inside Macy’s, where I was headed on the day after Thanksgiving, it was not much busier than you would expect it to be at the crack of dawn — even though the lights were bright and employees relatively alert.

“It generally doesn’t pick up until 6,” said Lara Pantin, an employee in the cosmetics department. This was the first year that the Macy’s in King’s Plaza had opened at 4 rather than 5, she said; in years past, some customers were lined up when the doors opened, but this year Black Friday was off to a slow start. Perhaps it would be busier in the housewares, Pantin suggested.

It wasn’t. No department had the frantic shopping scene we’ve come to expect on Black Friday. While Macy’s had marked down some merchandise 20 to 60 percent, no door-buster electronics were on sale to lure the shoppers. Some of the biggest bargains included: a five-piece luggage set for $49.99, marked down from $200; a mattress set for $249, marked down from $689, and a 12-piece set of pots for $28.99, down from $99.99.

At 5 a.m., the crowds were still trickling in. “The whole thing’s a farce,” declared an employee in the luggage department who declined to give her first name but couldn’t hide the nametag pinned to her shirt that said “Woodburn.” “What can you want at 1 in the morning more than sleep?” she asked.

Maybe the National Retail Federation was right that close to half of America’s population would be shopping the day after Thanksgiving. But at least some people had the sense to wait until daybreak. My faith in humanity is restored.

At Bloomingdale’s the Crowds Were Thick and the Bargains Sparse 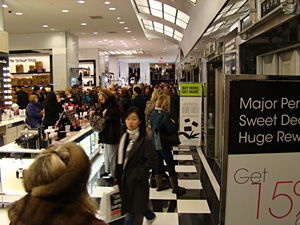 After sleeping off a huge meal and one-too-many glasses of red wine in celebration of Thanksgiving, I headed to Bloomingdale’s on Third Avenue and 59th Street for my first Black Friday shopping experience.

Merchandise was discounted a meager 15 to 20 percent, far less than the store’s summer sales, which offered as much as 60 percent off. Nonetheless, shoppers filled the store and crowded the shoe and handbag departments, as well as the cosmetic counters. “The store is much busier than last year, shoppers are buying noticeably more throughout the day as opposed to last year when it was busy only in the first few hours,” said a sales woman at a cosmetics counter who would only give her name as Millie.

Although I did see many customers exiting the store with the iconic Bloomindales “brown bag,” I decided to hold off on the commencement of my own holiday shopping until a few days before Christmas. I’m holding out for deeper discounts.

In Search of Deals on Electronics at a Staples in Bensonhurst

The Staples on Stillwell Avenue in Bensonhurst, Brooklyn was mobbed by 7 a.m., with shoppers scrambling for Staples’s “doorbuster deals”, including $100 Hewlett Packard computer monitors, $30 office chairs and $300 laptops.

By 9:30 a.m., the crowds had subsided somewhat; in fact, it wasn’t even as crowded as during the back-to-school sales, when parents rushed in for last-minute supplies for their children. As is usually the case at this Staples, most of the customers were Chinese-Americans who live in the neighborhood and who were searching for deals on electronics, rather than office supplies. Bins were set up in front of the registers with smaller items, such as digital memory cards and flash drives ($8 each), so people on line could easily pick up them up before getting to the register.

Kim Mak, an MBA graduate student at Baruch, went to Staples to take advantage of its in-store-only deals. His purchases included blank DVDs (100 for $10) and a paper shredder for $20. “I usually buy online because it’s easy,” said Mak, adding that he had come to the store because Staples did not put the items he wanted online.

Chaos, no Rain, in SoHo

The rain didn’t come, but the shoppers did. On Friday, the Soho area was flooded with shoppers looking to catch Black Friday deals.

The National Retail Federation forecasted a 2.3 percent increase in holiday retail spending from 2009, and the view from Spring Street suggested that their predictions might prove true.

It was nearly impossible to walk down Broadway to the Levi’s store, located on the end of Spring Street. Inside, the store was chaotic. “I didn’t really come for anything particular, the sales are usually pretty good after Thanksgiving, so I’m browsing until I find something good,” said Kelly-Jean Rainford, a shopper who had come in from Queens.

Many shoppers said that they would be shopping on Cyber-Monday too.