You Needn’t Be Jewish to Own a Kosher Restaurant

Story and photos by Chaya Rappaport

Allen and Angie Chan, the Chinese-American owners of Shang-Chai on Flatbush Avenue in Brooklyn, know more about keeping kosher than most Jews. They close their business early on Fridays, in time for the Jewish Sabbath, for all Jewish holidays. Phrases like “mazel tov” pepper their speech. The Chans are not Jewish. They are owners of what is probably the oldest glatt-kosher Chinese restaurant in all of Brooklyn.

“My cousin had a kosher restaurant. She wanted to retire and offered me the business,” explains Mrs. Chan, 54, a short, spry woman who emigrated from Hong Kong to Brooklyn at age 27 and met and married her husband, who had emigrated from Taiwan as a child, shortly afterward.

The Chans already knew something about running a Chinese restaurant: they worked at China New Star, a non-kosher Chinese restaurant owned by Mr. Chan’s father and across the street from Shang-Chai, for half-a-dozen years. But running a kosher establishment was something entirely different. Luckily, the cousin who sold them the restaurant, stayed on half a year to train the Chans in the business.

Mrs. Chan thought a kosher restaurant would attract many customers, but soon discovered that it was not so simple. “Twenty years ago, Chinese food was not so popular in their world,” Mrs. Chan says of Orthodox Jews. The Chans also discovered that Jews who are not strictly observant, even if they keep a kosher home, often will eat out at non-kosher places, perhaps steering clear of pork and seafood, while some Jews who are very religious won’t eat out at all, even in a kosher restaurant. And “we seldom have non-Jews,” says Mrs. Chan, save for those who come with their Orthodox friends, and Muslims, who trust that there is no pork in kosher food.

Because she knew that many customers were trying Chinese food for the first time, the Chans made a point of being accommodating. “I’d explain to them how it looks and tastes,” explains Mrs. Chan, and if they were unhappy with the order when it arrived, “I’ll exchange it. I don’t want them to be upset when they leave.” Some of the most popular dishes at Shang-Chai are sesame chicken, egg rolls and lo mein.

Roz Leffler, an Orthodox customer of Shang-Chai since the ’70s, has only praise to offer. “I like Chinese food, they make it very well.” Then again, she acknowledges, “what do I know from Chinese food?”

Chinese cuisine lends itself to kosher rules: Because dairy products are not used, the prohibition against eating meat and milk together is avoided. “The only difference is where the meat and chicken comes from,” said Mrs. Chan. No shellfish dishes are served at the restaurant.

Shang-Chai is certified as kosher by the Vaad HaRabonim of Flatbush, a reputable kashruth – the state of being kosher – certification agency, and as such requires a full-time mashgiach, (kashruth supervisor). “I open up and close” the restaurant, says Albert Balakhaneh, the current mashgiach. He inspects all deliveries, watches that no outside food is brought in by customers and checks the vegetables for bugs.

Sephardic customers often request that a Jew cook their meat, so Balakhaneh has even learned to cook basic Chinese dishes. He is paid by the restaurant’s owners, but his salary is decided by the Vaad so there will be no conflict of interest.

Mrs. Chan stresses that a kosher restaurant doesn’t make more money than a non-kosher one. “A normal restaurant is open seven days. Ours is open five and a half days. And there are lots of holidays. But even though we’re closed, we still have to pay salaries, rent, insurance,” she explains. 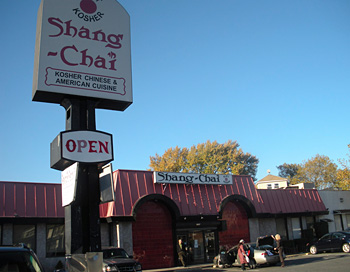 Post-expenses, Mrs. Chan says, she and her husband each make on average $50,000 a year. And, as small-business owners, they have no 401(k) or pension. “You have to save money yourself,” which is much harder, she says.

The restaurant’s Thursday buffet night, with all-you-can-eat for less than $20, still draws a large crowd. “But this two years is hurting us,” says Mrs. Chan because, with high unemployment, fewer people are throwing parties and banquets in the restaurant, which boasts a large carpeted and chandeliered party room that seats 130 guests, and is a big part of Shang-Chai’s business.

“Jewish people have lots of parties,” says Mrs. Chan, from a bris when a baby boy is eight days old to sheva brachos, a week’s worth of parties celebrating a newlywed couple.

Roz Leffler who has hosted parties at Shang-Chai, says: “They give a really delicious menu, they give you the most for your money, and they’re reasonably priced.”

The restaurant is not far from Flatbush, a neighborhood that has seen an explosion of kosher restaurants in the past few decades. Though not many are Chinese, the Chans say the competition is hurting their business.

But though kosher take-outs abound, and Chinese food appears on the menu of many kosher restaurants, Shang-Chai remains one of the fewfull-service kosher Chinese restaurants in Brooklyn. The Chans have educated their consumers well. Mrs. Chan estimates that 80 percent of her customers now are familiar with Chinese food. “Some are already third generation Americans. They know what they like; sometimes they create their own dishes.”