From screening films only in New York City to offering them online, around the United States, the Tribeca Film Festival is expanding its scope.

The Tribeca Film Festival began experimenting with online streaming last year, making available a $45 pass that people could use to watch some films from the festival that were offered online. 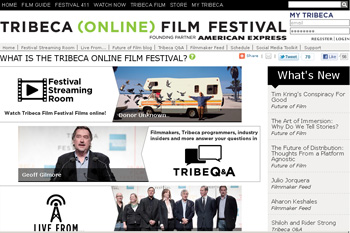 This year the fee has been eliminated, replaced by a virtual seat reservation system, in which the public can purchase online the limited number of opportunities to view the film. ? “We are excited about this idea of virtual screenings and reservations,” says Jon Patricof, chief operating officer of Tribeca Enterprises, which operates the festival. “It has the potential to be a model for online viewing of films that hasn’t really been tried, as far as we know.” This year’s Tribeca (Online) Film Festival will show six feature films and 18 shorts. So far, the response has been overwhelmingly positive, festival officials say.

While online streaming of films raises some issues, such as piracy, for the documentary “New York says Thank You” it was the perfect platform. This documentary that has been filmed for six years and follows four New Yorkers who are helping communities around the United States to rebuild after natural disasters, The film offers an inspiring and positive take on the repercussions of Sept. 11, sending a message of healing through volunteering.

Scott Rettberg, director of “New York Says Thank You,” says his film is for whole country and he’s delighted that it will stream. “It was more about more people getting to see it and be inspired to volunteer,” He says.

Most people who will be streaming the movies online are young, one consideration Rettberg took into account when he made the decision to be part of this festival.

Megan Sleeper, producer of “New York Says Thank You,” says she sees another advantage to showing their documentary online: some people who were part of the film, those that received help in places like Kansas, who won’t be able to make it to the festival, and now will have a chance to see it.

Patricof notes: “Originally when we launched the festival last year, we thought the audience would be entirely people from outside New York. We were excited about offering people who can’t make it to New York during the festival the chance to see films, engage in the discussions and watch footage. We found out that it’s not just people outside New York who participate but also those who already attend the festival who want a richer, deeper experience.”

There is, of course, a big difference between the experience and reactions directors will get from audiences that attend the festival and those that will be commenting about the film via Twitter or Facebook. As a filmmaker, Rettberg says the reactions he gets from an online audience, as opposed from a live one, will definitely be different, explaining that there is a more freedom to be honest on the Internet and it’s a great place to inspire conversations. On the film’s official Tribeca page, it has more than 60 comments were posted about the film, its Web Site shows.

Jerry Rothwell, director of “Donor Unknown,” another documentary that will be streaming online, adds, “The online festival is experimenting with a new kind of festival, and it’s exciting to be part of that.”

His documentary is a story of a sperm donor and the children who want to find him. It raises several questions regarding family and biological connections and is likely to lead to many discussions.

Rothwell says his films are best viewed communally, and that the traditional way demands an audience’s attention. Regardless, Rothwell says, “people can still make an event out of watching a film they’ve found on the internet at home. And the exciting potential of an online festival is that you can have a very direct relationship with the audience – getting immediate responses, linking to other relevant content and offering a kind of individual Q&A to each audience member.”

And that is exactly the experience that Tribeca is creating. In addition to streaming films online, it is offering a number of interactive features, including: Live From…, Tribeca Q&A, Filmmaker Feed, the Future of Film blog, Twitter and Facebook pages. All of this content has created a new way to be part of the festival, linking people in the online community with others just as passionate about films.

The Tribeca (Online) Film Festival may very well be providing a look into the future not only of film festivals but also how films are distributed.

The Tribeca Film Festival starts April 20 and runs through May 1. The festival site is now live, and tickets as well as virtual reservations are available at www.tribecafilm.com/tribecaonline