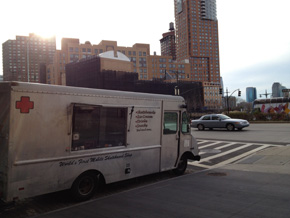 Skateboarding has enjoyed a boom in New York City during the last decade, as the Bloomberg administration has doubled the number of skate parks.

With new parks in Brooklyn, Queens and Manhattan new businesses have emerged to meet the rising demand, among them the so-called Tre Truck. On any given day, outside the parks, you’re likely to spot the plain silver-sided self-proclaimed “World’s Finest Mobile Skateboard Shop” parked at a nearby curb.

The Tre Truck is owned by Alex Ritondo, 21, a skateboarder and entrepreneur who drew his inspiration from the food trucks that can be found throughout the city. The Tre Truck travels from the Lower East Side skate park under the Manhattan Bridge to the newly constructed Far Rockaway skate park and to points in between.

The goal is to bring hard goods — the skateboard decks (the platform on which the boarder stands), trucks, the turning apparatus and wheels — directly to skaters at prices comparable to those in a moderately priced skate shops. At an average skate shop, decks usually go for about $60 and trucks for $40.

“Skateboarding has always been my passion,” says Ritondo, his brown shaggy hair tucked under a baseball cap. “I originally wanted to open a shop. Me and my friends always talked about it.”

With skate shops, as with many businesses, location is a key element. And “a good location for a skate shop is going to cost a lot of money,” adds Ritondo.

Then, too, in the last few years a few skate shops have closed, in part because of a weak economy, but also because gentrification has pushed the shops’ customer base—typically young 20-somethings—to other neighborhoods in the outer boroughs.

A graduate of Borough of Manhattan Community College with a degree in entrepreneurship, Ritondo skateboarded daily while at school and decided to reimagine the idea of the traditional skate shop to make his dream a reality.

A traditional skate shop acts as the headquarters for a community of skateboarders. The shop typically purchases merchandise wholesale from larger suppliers who supply similar shops all over the country.

The Internet has taken some business away from brick-and-mortar retailers. But for die-hard skateboarders, the local skate shop/hangout is still the preferred locale for buying equipment and accessories, including skateboard brand shirts, shoes and other items that define the lifestyle.

While Ritondo couldn’t afford to open a skate shop, he saw opportunity in the proliferation of new parks.

“I don’t think that Tre Truck would have been sustainable without the creation of all the skate parks,” says Steve Rodriguez, a skateboarding legend in New York City who also owns Five Boro Skateboards. “Tre Truck needs that concentrated audience to do enough business to make it worth it.”

Ritondo bought a used truck from a friend on Long Island with savings and help from his family. He also got help from some of the bigger players in the city’s skateboard industry.

For example, Michael Cohen, shop manager of the Shut Skateboards brand and flagship store in the Lower East Side, agreed to let Ritondo open an account to sell Shut Skateboards.

“It is a win-win situation, people will buy from the Tre Truck and then come to the store,” says Cohen who has known Ritondo for several years. “At the same time we get kids who come here and we will tell them to check out the Tre Truck at their local park.”

The Tre Truck, which has been operating since September, has brought in about $10,000 in revenue so far. Ritondo knows that he will need to increase sales substantially in order to stay in business. He is hoping one day to franchise the operation and have trucks operating throughout Long Island.

Then too, skateboarding is seasonal and there isn’t much business in the winter.

Despite these challenges, Ritondo wins praise from both competitors and customers. “We offer a lot more variety, but what they are doing is a cool idea,” says Lennon Ficalora, the owner of Wampum skate shop on the Lower East Side.

Skaters like Frank Nicado, a regular at the Chelsea Piers 62 skate park, are often on the lookout for Ritondo. “The Truck just always has what I need,” says Nicado. “When I lose a bolt or a bearing they are always willing to hook me up.”