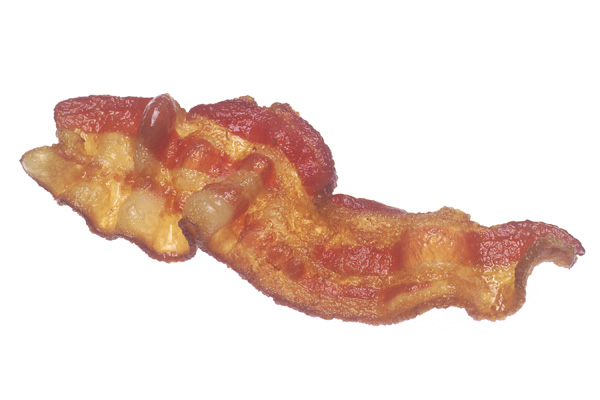 Bacon isn’t just for breakfast anymore — a sinful side to eggs and hash browns.

Now you can have bacon for lunch, dinner, dessert and, in some parts of the city, even a midnight snack.

“They cooked an entire pig,” said Jon P. in a post on Yelp. “They were low when we got there, so they gave us the snout to munch on. Ya, I took a bit out of a hairy, pig’s nose. No one said this event was classy.”

Waffle and Wolf, a waffle sandwich restaurant in Williamsburg, Brooklyn, specializes in waffles with embedded bacon. As a main course, it also has a “Wolf waffle,” a bacony waffle with tomato, cheddar, arugula and avocado yogurt. The bacony waffle dessert option comes with peanut butter, banana and caramel. And for those who are in the mood for a bacony late night snack, Waffle and Wolf delivers its bacony waffles as late as midnight.

Matt, the salesperson at the restaurant, who is also the chief waffle maker and a self-declared bacon fan, says: “The reason people like bacon so much is probably because it’s comforting.”

And a review on Yelp, Angelita B. says: “They put the chopped bacon in the waffle batter. It was a freaking Bacon Waffle, slathered with tomato jam and chunks of avocado, folded over like a taco.” Bacon treats are available on the go in New York City. A must-try on a hot summer day is Coolhaus, a food truck that serves a candied bacon ice cream, along with other non-traditional flavors like “beer & pretzels” and “Peking duck.” Their trucks can often be found by Union Square and on 23rd Street and Park Avenue.

The love for bacon extends beyond the edible. J&D now produces a bacon-flavored chap stick. And if you enjoy the smell of bacon in your shower, a bar of bacon soap from Archie McPhee might appeal.

The science behind the appeal of bacon is called the Maillard reaction, which occurs when bacon is heated and the amino acids in the meat protein combine with the sugars in bacon fat. During this process, aromas and flavors are released. The taste and the smell of sizzling fat give bacon its appeal, along with its high salt content, which makes almost anything taste better.