In the Bronx’s West Farms, Families Struggle for a Better Life and Worry About Their Children

Story and media by Carlos Canela

Eight-year-old Kayden Montes, who lives in the West Farms section of the Bronx, has great respect for “El Cuko,” the imaginary monster he hears when night falls.

“When it’s dark outside the Cuko comes out with all his Cuko friends and I hear them from my room all the way up here yelling and screaming all the time,” Kayden says. “My mommy says that if I don’t do good in school, that’s how the Cuko gets you and makes you follow him too. That’s why she doesn’t let me play outside.

What Kayden doesn’t realize is that El Cuko and its friends are actually neighborhood delinquents, and his mother is trying to protect him from becoming just another “hood rat.”

“This place isn’t a good environment for kids to grow up in, if it isn’t gun shots, it’s ambulances or police sirens waking you up in the middle of the night,” said Hernandez, a single mother who also has a daughter, Kailin Montes.

Parents in West Farms, in the central Bronx, north of the Cross-Bronx Expressway and south of the Bronx Zoo, look to after-school programs as a means of keeping their children on track for a better life. But plans for extensive cutbacks to those programs have left parents fearful.

Long-time West Farms resident Maria Merejido, 54, remembers what it was like raising four boys in the neighborhood, “I always had to stay on top of them and make sure they did all of their work, I let them watch TV after but there was no way I was gonna let them play outside in that mess,” she says.

The mess she referred to was a neighborhood embroiled in gang wars during the late ’80s and early ’90s. With all of her children grown, ranging now from ages 26 to 34, Merejido recalls putting them through college, “It wasn’t easy but I always on top of them about their work. Around here college is a dream, but too many of these kids give up on it. So many of these kids get stuck doing the wrong things and it’s hard once you start down that road.” 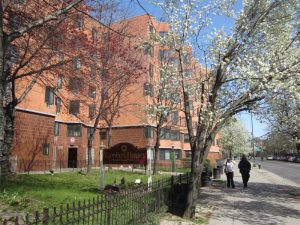 An area primarily consisting of low-income housing, West Farms is one of the poorest neighborhoods in New York City, with 34 percent of its households making $15,000 or less, according the Census Bureau. The hundreds of families on their way to the zoo seem all but oblivious to the seedy orange five-story buildings they pass.

The neighborhood’s crime rate has dropped 65 percent since 1993, according to CompStat, the police department’s database. Yet West Farms remains one of the more violent areas in the city. With a population mostly too poor to live anywhere else, the residents consider the two fastest ways out of the neighborhood to be getting an education or getting thrown in prison.

The city’s plan to close 10 schools in the Bronx includes at least three that will affect the West Farms neighborhood, and parents and teachers are all feeling the stress. “All of my friends that still teach in the Bronx are saying similar things, they feel underappreciated and under attack when they are not to blame,” laments Annette Garb, 28, a former third-grade English teacher.

The Panel for Educational Policy, led by Chancellor Dennis Walcott, decided that these schools could not be kept open any longer: after considering test scores, graduation rates, and evaluating the leadership. (The closings are being challenged by the teachers’ union, the United Federation of Teachers.) All the schools being shut down have received a grade of D or F in the last round of evaluations.

After-school programs, on the other hand, are suffering from a tightening budget. With more than $170 million in cuts in children’s services cuts proposed in the 2013 budget, more than half of the after-school programs in the city will end. Now many children will have to go straight home and wait for their parents to arrive from a long day of work, in the hopes that they can help.

But in areas like West Farms it’s never that simple, says after-school advocate Angela Johnson. “A lot of these parents want to be more involved but either they have to work all the time or they just aren’t capable of helping, so it comes down to programs like these and people like us to give these kids a chance.”

Johnson’s analysis is hard to contest, “These kids have it hard enough living in this neighborhood,” she says. “It’s our responsibility as adults to make sure they have every chance to make it out.”