Article and illustration by Yulia Rock

One evening a while ago, I entered a noisy subway car infused with a concoction of odoriferous aromas. I had just used my last MetroCard fare to travel to Chinatown to buy houseplants, and arms were full with six 4-foot-tall  bamboo trees, eight smaller bamboo plants, a healthy aloe and fruits – which I’d been able to buy for only $20.  I put on my usual subway guards: earplugs and a blank stare. Nobody looked at my precious plants and me.

Except for one man. 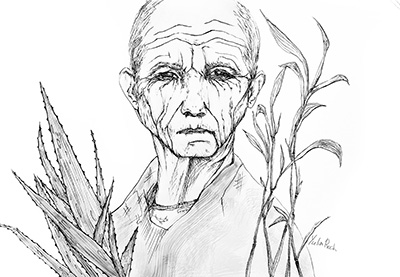 I’ve been living in Manhattan for five years, so I’ve learned to build a wall — especially toward homeless people. But I can’t ignore their numbers – which have soared over the last decade. At least 60,306 homeless people live in New York City, according to the city’s Department of Homeless Services. Yet every time when a beggar asks me for help, I wonder: Why should I share my hard-earned money with an unemployed person? Especially one who probably receives government assistance that comes out of my taxes? Why don’t I feel guilty anymore when I ignore “those” people? Am I a bad person?

These thoughts crossed my mind when I stumbled upon another beggar. Sitting in a corner seat of a crowded subway car, he looked frail, with yellowish, slightly sunburned skin. His balding head, with threads of salt and pepper hair, was lowered, and he lifted it every time a new person would stand next to him, when he would ask for a quarter. I was squashed in and ended up standing right in front of him. The odor of his unwashed body and urine pervaded the air around him.

He looked up at me and hopelessly asked for that same quarter. I had only 20 cents; he smiled sadly and accepted the coins. His shoulders sank lower. Traces of guilt seeped into my heart, and I felt compelled  to turn out my pockets and open my wallet to prove my honesty. He blushed and began looking around, his eyes tired and red, hopelessly peering at new walk-ins. Everyone tried to stay away, although one woman sat next to him. In a whisper, he begged her for some change, but she looked away.

I asked him if he wanted plums and pears. He bashfully accepted them.

“Would you like to take a plant?” I blurted, with no thought.

“Really?” his face looked surprised. “Yes, I would take one.” A smile appeared on his toothless mouth.

“Do you have a place for them? Where do you live?” I responded.

His name was Ben; he lived in a homeless shelter outside of Manhattan. His commute to Manhattan usually took an hour and a half, he said.

“I take the 6 train to 125th Street and then transfer to a bus and then walk,” Ben said in a low raspy voice. “I have my own room, and I touch nobody and nobody touches me. There are some crazy people, loud kids, but I stay away.”

He smiled while holding plants in both of his hands. I ended up giving him all my plants after he couldn’t decide which one to take. His head lifted and his posture slightly straightened. His eyes were shining, welling with tears.

“I drunk a lot, so my family turned away from me,” Ben mumbled, his head dropping again.

His story brought my childhood memories flooding back. After Perestroika, during the ’90s when the Soviet Union dissolved, in Russia inflation left thousands of families in abject poverty. Mine was one of them.

My father was defeated by vodka, but, somehow, my parents managed to stay together. I know it was hard for my mother to support two children. She did not receive a salary for more than six months. Nobody did,  back then. My sister Irina, 8, and I, 10, had to beg for money and food on the streets of Vladivostok. We did not look white, so people spat “ne rysi” at us. It means, “not a Russian person.”

A feeling of not belonging and a non-existence haunted me for years. But one moment I remember, even after all these years.  A middle-aged white man in a nice leather jacket looked into my eyes, and although he was in a rush, stopped and gave me 500 rubles, equal approximately to 24 cents in 1994. I bought a few loafs of black bread, and with that, my family was able to eat dinner for several days.

“But, but wait?” Ben’s voice brought me back to the present. “Why are you doing this? There are hundreds of people, why are you so kind to me?” His blue eyes full of wonder looked at me from heavy eyelids.

“I do not know. I felt you need it more than me. These are lucky bamboos,” I only had time to say because my stop was approaching.

I touched his shoulder and said that everything will be all right. Ben grabbed my hand and began kissing it. He looked at me while I was leaving and beamed like a child at Christmas. His face was illuminated.

It was screaming, “I exist!”