As April gently became May, a passion and appreciation for digging, planting and growing was reignited in Susan Cobo, 24, a volunteer at Two Coves Garden, in Astoria, Queens.

The day dawned cloudy and cold with a light rain, and Cobo put her pink gloves and went to work. Quickly, she gathered her tools and began weeding her plants. Her two huge plots, where she grows beans, herbs and peppers, fill her with satisfaction and pride each growing season.

“Gardening is special to me, and it is my favorite time of the year. Every year, I try to increase awareness that gardening is important to create a healthy life, healthy community, and healthy world,” said Cobo.

Cobo is one of a new, younger breed of community gardeners in New York City. As baby boomers have retired and downsized, Millenial gardeners are poised to pick up where they have left off.

They value clean, healthy and local sourcing and seek ways to support ecosystems and “save the world,” according to the 2017 Garden Trends Report, published by Garden Media Group.

“From what I have seen, gardening tends to span all age groups,” said Cassandra Stern, a volunteer at the Long Island City Roots Community. “What we are seeing from the younger generations is that they are very excited about the opportunity to grow their own produce.”

Five million of the six million people who took up gardening in 2016 were millennials — those between the ages of 21 and 34 — according to the national gardening survey released by the Earth Media Group.

“Millennials are intrigued by learning to grow their own things, and they want to learn the basics. They come to workshops with their phones in hand to show and discuss the ideas they’ve found on Pinterest,” said Kevin Iturralde, a garden volunteer at Two Coves.

During the financial crisis of the 1970s, many parts of the city suffered. A nonprofit environmental group dedicated to preserving urban gardens, the Green Guerillas started in 1973 by lobbing “seed bombs” packed with fertilizer, seed and water over fences around vacant lots, where access was otherwise limited, in an attempt to beautify some of these eyesores with greenery.

The GreenThumb program in 1978 provided assistance and coordination to community groups willing to tend to vacant city owned lots. Through the years, GreenThumb created more programs to encourage and protect community gardens.

In the 1990s, the City indicated that many community garden sites would be sold to developers for housing and commercial opportunities. The nonprofit New York Restoration Project was crucial in preserving these sites and protecting gardens across the city during the movement.

GreenThumb has became the nation’s largest urban gardening program, providing support to over 600 gardens throughout the city. In addition to assisting the gardens, they donate materials such as tools and mulch.

Gardens are continuing to blossom in schools, backyards, and public housing property. They become spaces where city residents can come together to build and enjoy green space, grow food, and learn about the environment, beacons of green space within the vast expanses of asphalt and buildings.

The Development of Community Gardens 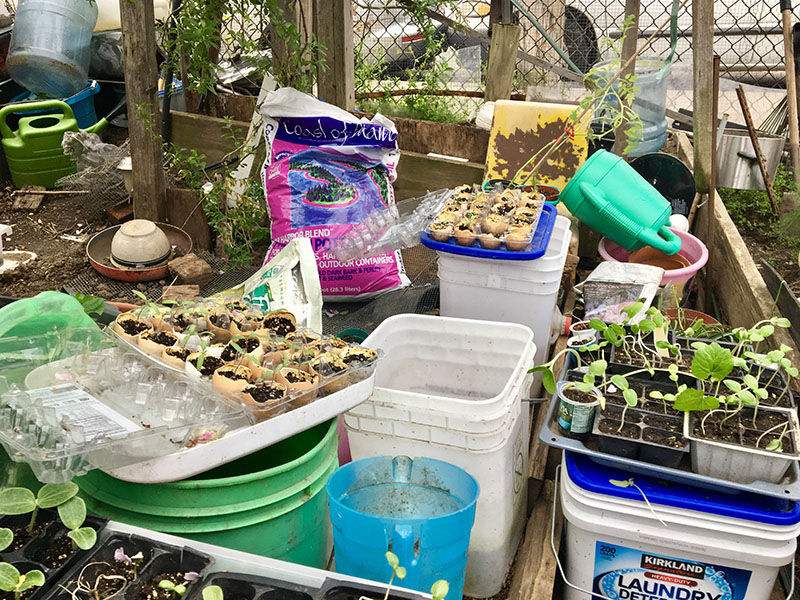 “In a communal-style garden, everybody is kind of in the same vicinity working. It tends to break down barriers that might have been there age-wise between generations or between ethnicities, because everyone is helping each other,” Iturralde said.

Millennials are embracing gardening, especially food gardening, for reasons including locally-sourced foods, sustainability, and wellness. They are grabbing their shovels, growing their own food, and decorating their spaces with plants.

Stern says the spike in young gardeners doesn’t surprise her one bit; the average age of the gardeners who volunteer are 25.

“Most of the time, I’m searching tips on how to have a successful growing season. I love bringing friends and family gifts of my peppers or herbs.” Cobo said. “They never believe I’ve spent my free time caring for them.”