Article and video by Nicholas Marrero; Photos by Seth Cerrate and Ruth Ostrow

Fifty years after moving into its new home at Lincoln Center, the Metropolitan Opera is celebrating with a gala performance on May 7.

Dollars & Sense went behind the scenes to learn about all the hard work that goes into every performance, touring the backstage area and visiting the Wig Department and the Costume Shop.

“I think about where we were; it’s sort of like thinking about a 19th century institution, and now we are a 21st century institution,” said Elissa Iberti, 62, head of the costume shop. “We here at Lincoln Center… it’s just so alive and merges like the visuals and the performances and everything together. It’s a lot to be happy for and to celebrate. We have a cast, an amazing cast, for this celebration that is going to take place.” 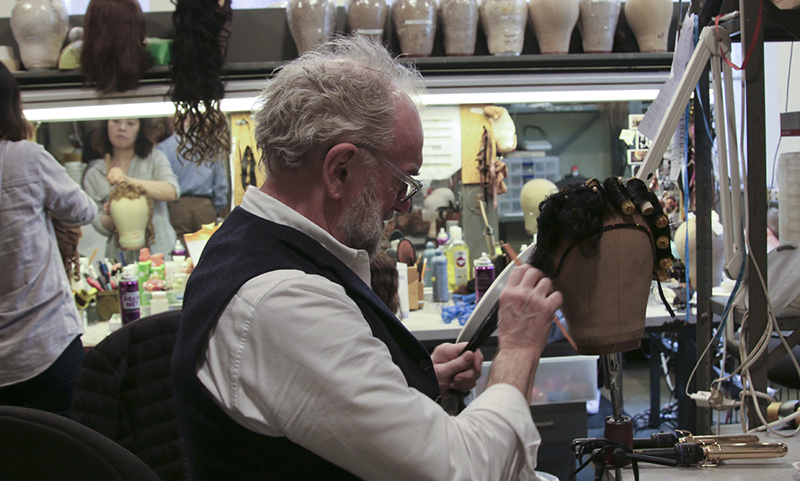 Budget constraints always create challenges for the backstage support department. “The challenges are always to make the designers’ dreams come true within that responsibility that I have,” said Iberti, whose first job out of college was with the Met Opera in 1980. “To make sure that we stay on top, that’s really important. But we also want to create and carry out the designers’ vision, and we also have to make sure that the singers are comfortable and that they look their best.”

Tom Watson, 64, has been head of the wigs and makeup department for 17 years, and believes  wigs and makeup have changed significantly during his time there. “Lighting has become very different, and you can really see things much clearer,” he said. “Makeup and hair has become much more realistic, and I think the public has grown to expect it to be more real. They see so much, they are so much more informed that it’s a more delicate touch.”

Expectations such as this weigh on Watson and his crew when prepping for the Met’s performances, which play out on stage and then broadcast in high definition to theaters around the world.

New technologies and resources have improved routine tasks within costume shop, making new costumes built to last. “I think the sky’s the limit,” said Iberti. “I mean with the digital age we can print fabric and we have different fabric cuts to use. There’s something that has taken us so far ahead but yet you know tailoring and pattern-tweaking are pretty much staple in terms of how we do it. We take things to engineering like we’re just not making clothes more like a jacket or suit. We are really taking something to the next level.”

“We have a very strong education program and we are kind of trying to reach out right now,” Iberti said, looking for more middle-school students to work with. “So basically we talk about costume design and we give them homework assignments. Soon I’ll be dealing with seeing those results and talking about it to them. It’s sort of amazing you can reach students across the country and be in these classrooms and talk on a daily basis about things for students who have never been to New York. We have HD being broadcast everywhere, so it’s really great.”

Watson and his crew are currently prepping for next season, which opens in September. “I don’t have any say in future production but certainly there have been directors in the last few years that made a great impact,” he said. “Now I would hope that some of them are coming back, and I would imagine having a new music director could be very exciting for the company. And I wish them all the best,” he said.

A year ago the Met announced that Yannick Nézet-Séguin would be its new Music Director, replacing James Levine, who served 40 years in the position.

Iberti said she anticipated many changes moving forward. These include newly commissioned work as part of the plan to recruit new audiences, hoping to add younger enthusiasts to its established audience.

“I think it should be more communication about what opera is and what place does it serve. Because I think it’s stories are timeless, plus you couple it with beautiful music,” Iberti said.

Fifty years at Lincoln Center and 133 years since its founding. On with the shows.