The Reverence of Hare Krishna Devotees

The rhythmic drumbeats and heartfelt chanting of the followers of the International Society for Krishna Consciousness is something every New Yorker has heard at least a handful of times. These devotees can be found in high-traffic areas around New York City in a blissful state of song, yet even though their presence has become commonplace, few people have taken the time to understand their spirituality and beliefs.

This prayer is a form of kirtan, or the repetitive chanting of mantras and other hymns accompanied by simple musical instruments, including the mrdanga drum, kartals similar to hand cymbals and the harmonium, a small hand-pumped organ. By chanting this mantra, devotees aim to unify themselves with Krishna’s energy and to achieve a natural, pure state of consciousness–what they call “Krishna consciousness.”

“I’ve been chanting Hare Krishna most of my life and it’s only gotten better,” explained 22-year-old Hare Krishna monk Mahotsaha Das. “The chanting actually helps you clean the middle of your heart, helps you realize what your internal identity is.”

The Hare Krishnas are the largest branch of the Gaudiya-Vaishnava sampradaya, a tradition of the Vedic cultures. The beliefs are based on the Sanskrit texts Bhagavad-gita and the Bhagavata Purana, which are also the basis of the bhakti yoga tradition. The International Society for Krishna Consciousness was originally founded to spread the practice of bhakti yoga, which has been practiced in India since the 15th century, yet first emerged in America in the 1900s.

Hare Krishna devotees are often recognized by their appearance: their saffron and white apparel, shaven heads and tilaki, or the U-shaped clay markings on their foreheads.

Which color devotees wear depends on their standing and level of devotion. Those wearing white are either new to the movement, grihastras (married individuals) or those who have chosen to remain single and dedicate their lives to serving Krishna. Those who wear saffron are Hare Krishna monks or brahmacari, students of the beliefs who have chosen celibacy and to dedicate their lives to serving Krishna and acquiring knowledge.

These guidelines only apply to male devotees; female devotees dress in sari, or Indian dresses, of different colors.

Devotees shave their heads for the purpose of cleanliness. As followers of Hare Krishna, they consider cleanliness an important part of their practice because cleanliness is close to godliness. However, Krishna devotees leave a small patch of hair on the back of their heads, which is known as a sikha, to distinguish themselves from Buddhist monks, who also wear saffron and have shaven heads.

Devotees also apply clay markings, or tilaki, to 12 places on their head, arms, chest and back. While applying the tilaki, devotees recite mantras which contain the 12 names of Krishna. This process marks the body of the devotee as a temple, purifies the body, and protects the body from the influence of evil.

Yet many devotees of Hare Krishna lead regular lives, wearing regular clothing and holding jobs while maintaining their beliefs through prayer, chanting at home and attending “Sunday Feasts” at Hare Krishna temples, a tradition practiced around the world where followers come together to socialize, learn, chant, dance, and feast on food as an offering to Krishna.

“You practice not to get something, but the practice itself is the reward,” explained Jai, a Hare Krishna devotee and teacher at the Bhakti Center of New York. “The idea that bhakti leads to more bhakti, love leads to more love. you know, love is it’s own reward so that’s very unique to our tradition.”

Individuals who practice bhakti yoga also follow a sanctified lacto-vegetarian diet, in which they offer their meals to Krishna and avoid the consumption of meat, fish and eggs. The final practice is living life in a way which upholds the principles of truthfulness, mercy, austerity, and cleanliness.

“The community that we live in is full of love, full of people that don’t want anything for their own benefit; the society of Krishna Conscious devotees is a society to help people to see what love really is,” said Prasad Dasa, a Hare Krishna devotee. “The relationship of love is based on serving god, serving Krishna together.”

Here are the stories of some devotees. 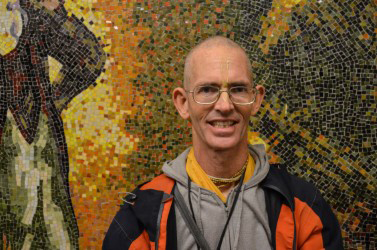 “As a college student I checked out different spiritual groups. A Hare Krishna devotee invited me to live in the temple in NYC during my year off from college. I liked the chanting, the food and the philosophy; it had everything every other group had and more.” 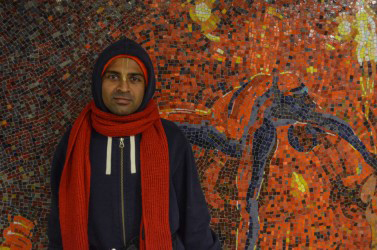 “I became interested in Krishna consciousness after reading the Bhagavad-Gita as It Is. The philosophy presented in the books of Bhaktivedanta Swami Prabhupada had answers for life’s most profound questions and a practice that anyone could take up. I joined as a monk, inspired to give my life to the spreading of the principles of love of God, devotion, peace, and spiritual happiness because this is what the world needs.” 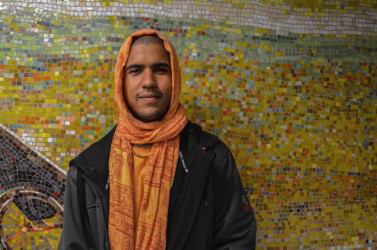 “I joined the movement after coming in contact with the Bhagavad-Gita as It Is. The book completely challenged the perception I had of the world. I felt like it was the truth even though I didn’t understand much at first, but I decided to dedicate my life to searching after my true self and my relationship with the divine.” 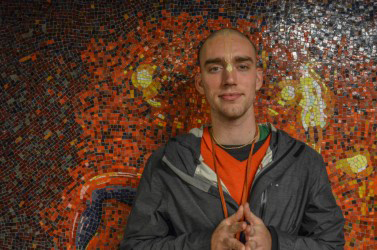 “I joined the movement when I started to chant the Hare Krishna Maha Mantra–I felt great happiness and peace in my life and I started to perceive the presence of Krishna’s love in my life and as I started practicing more and more, the miseries and suffering of this world all started to diminish and I understood that this is the right path for one and all to attain the topmost perfection of life.” 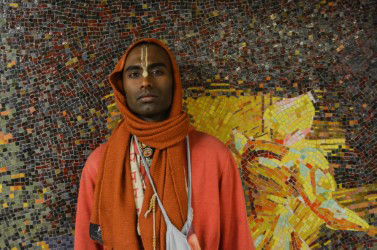 “I joined the movement because ain’t no party like a Hare Krishna Party ’cause the Hare Krishna party don’t stop.”