The Return of the Cucumber Slayer: Quest for a World Record

Photos and text by Jorge Patino 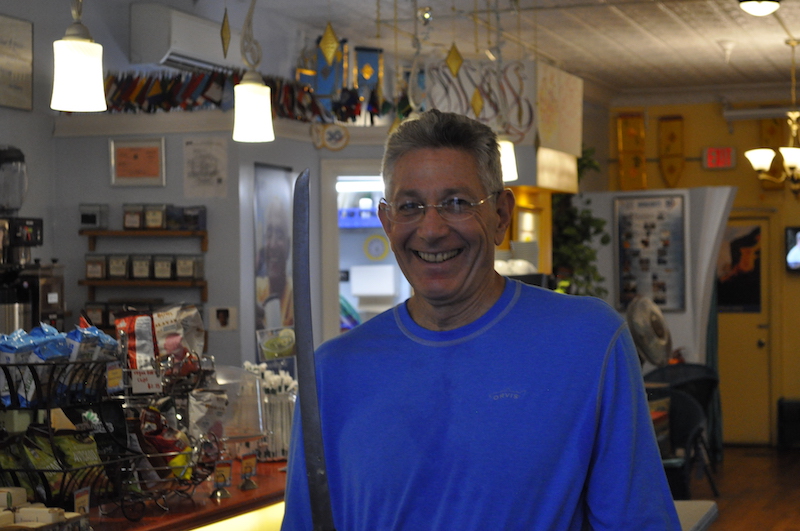 Meet Ashrita Furman—Guinness-world-record-breaker—as he gets ready to reclaim the title of cutting the most cucumbers held in someones’s mouth with a samurai sword in a minute. Ashrita’s record was equaled back in November 2017 by German enthusiast André Ortolf, who matched his previous achievement of 46 chopped cucumbers. 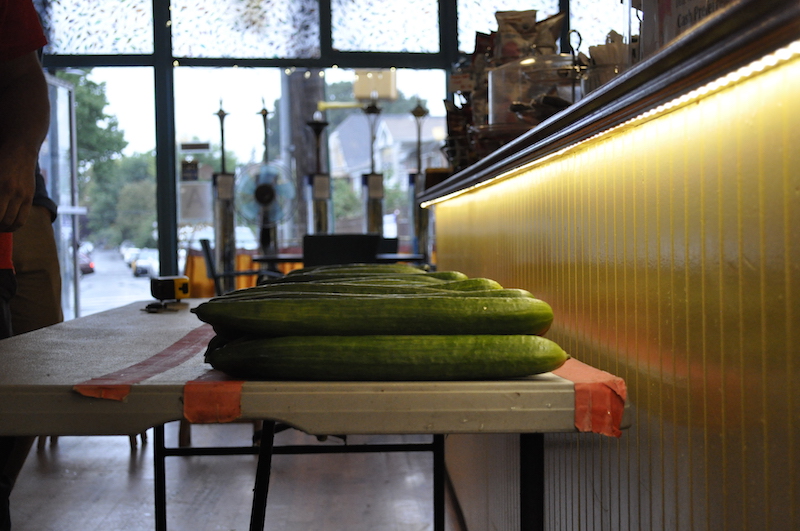 On Sept. 9, the soon-to-be-victims are carefully arranged on a table at Panorama Cafe, in Jamaica, Queens. Ever since its inception, the Guinness World Record committee has often requested for records to be broken at public spaces in order to safeguard the accuracy and honesty of its documentation through videos, photos and eyewitnesses. 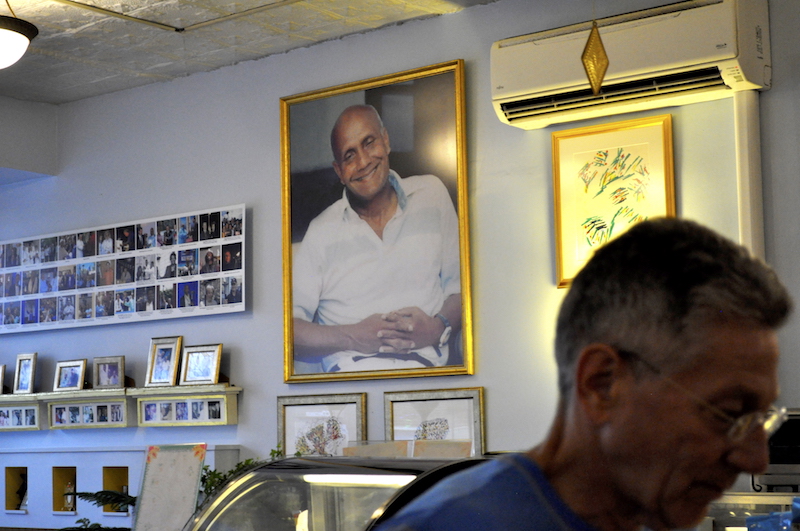 Ashrita, the spiritual name by which he is known, walks past a photo of his smiling teacher, Sri Chinmoy, which is displayed at the entrance of this local cafe run by students of the master. Ashrita, 64, has set hundreds of world records and is a member of the Guinness Hall of Fame. He set his first record in 1979 when he collected 27,000 consecutive jumping jacks. He draws his inspiration from Sri Chinmoy’s yogic philosophy of self-Transcendence, and has always attributed all of his success to the dynamic power and inner-wisdom derived from his daily practice of meditation. 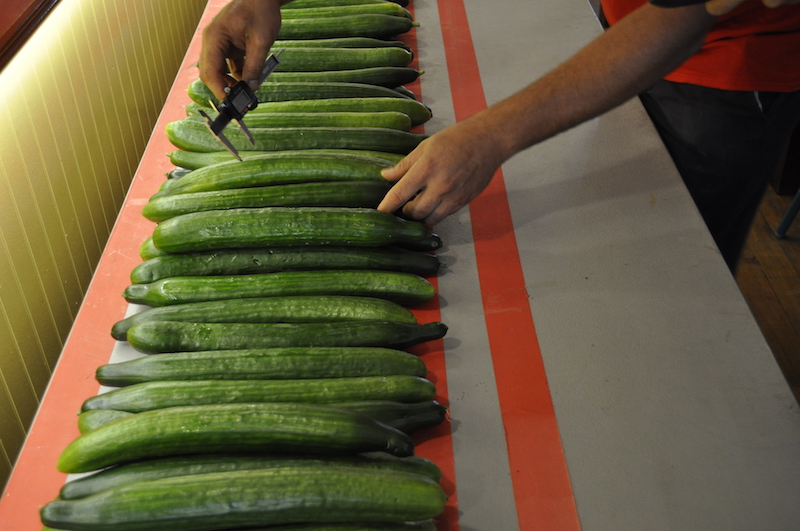 After laying the cucumbers out, Homagni Baptista, from Brisbane, Australia, makes sure each one meets the minimum size of 30 centimeters by 4 centimeters, as stipulated by the record’s guidelines. He has helped Ashrita with multiple records all over the world: from skipping rope the most times in one minute at Angkor Wat, Cambodia, to catching the most speargun arrows underwater in 60 seconds at a pool in New York. 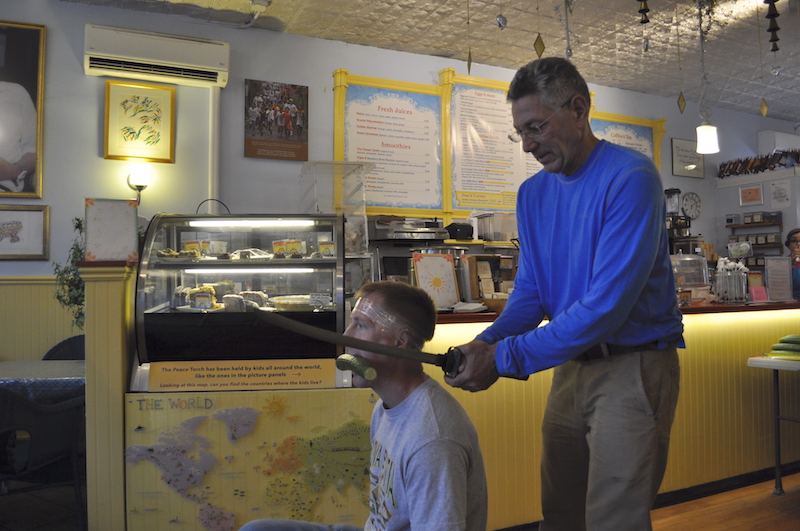 In the meantime, Ashrita gets a feel of his wakizashi sword by slicing some extra cucumbers with the assistance of Scott Schuetzelr, who has participated in a number of different records over the past years. He is one of the two volunteers willing to hold a cucumber in his mouth, while Ashrita swiftly hacks its edges from behind. As a preemptive measure, he has decided to protect his ears with tape in order to avoid any possible accidents. Although Ashrita has never injured others, he once stabbed himself trying to sheathe his sword during a mid-air-slicing-apples record for which he was practicing. 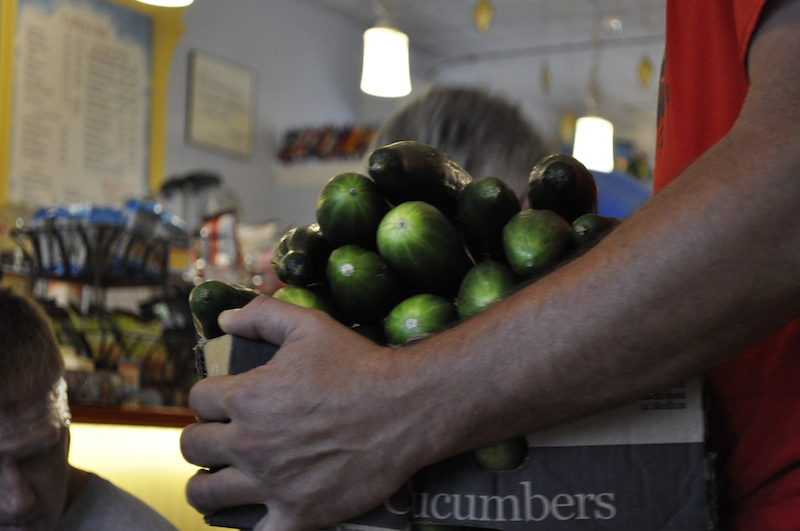 As part of the strategy devised by Ashrita during the past two months, both Homagni and Scott collect about 30 cucumbers inside two cardboard boxes that they will hold on their laps during the attempt. 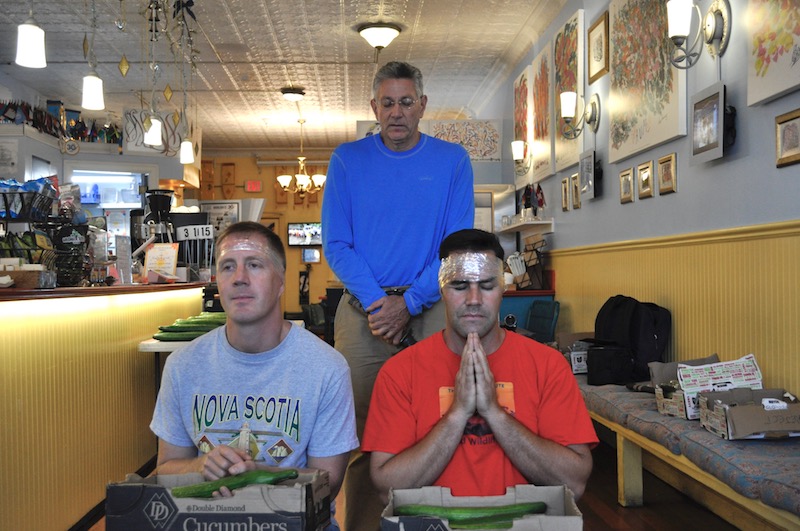 Ashrita, Homagni and Scott, meditate in order to facilitate a better and safer performance. For Ashrita, this is another opportunity to transcend himself, and gain a deeper understanding of who he is as he discovers the infinite potentialities of his expanding being as manifested through his spiritually-sourced physical actions—slicing cucumbers. “I’m trying to show others that our human capacity is unlimited if we truly believe in ourselves,” states Ashrita on his website. 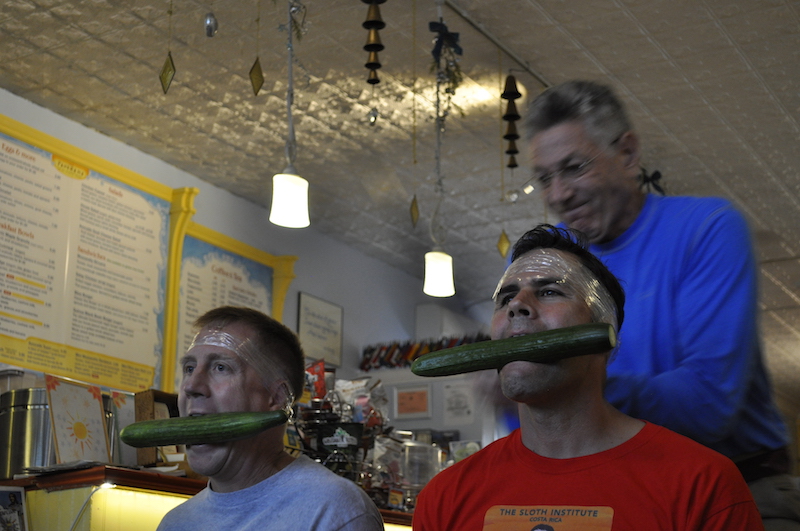 Ashrita chops both edges of every cucumber with a controlled downward strike that prioritizes efficiency, as well as his friends’ safety. Ashrita’s swordsmanship has been influenced by Japanese iconic samurai, Musashi Miyamoto, founder of the Nito-Ichi-Riū style and writer of “The Book of Five Rings” whose message aligns with the spiritual and physical discipline embodied through Ashrita’s simplicity, self-control and personal progress. 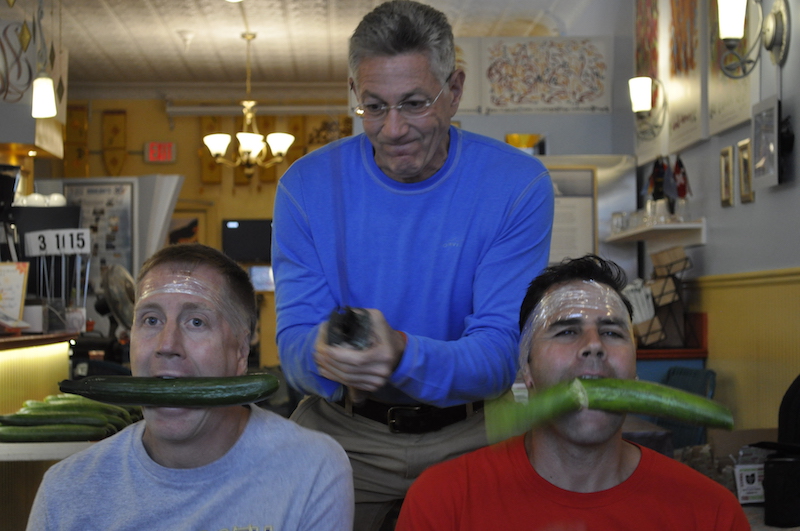 Ashrita’s strong upswing breaks the cucumber in half and slightly upsets his concentration. While working under time-constrained circumstances, he seeks to create a perfectly harmonious correlation between intention and result within a patterned time-structure flow of his katana upon which the success of this feat depends. Concentration is a key element of Ashrita’s meditative practice, which seeks to transcend any mental effort that may bring about a self-conscious knot on a strand of actions executed from a place where, more than a mind, there’s only a purpose and the direct experience thereof. “The moment I start thinking on what I’m doing, or something unusual like this happens, I lose the needed impulse to go through the motions without stopping,” commented Ashrita during a previous failed attempt. 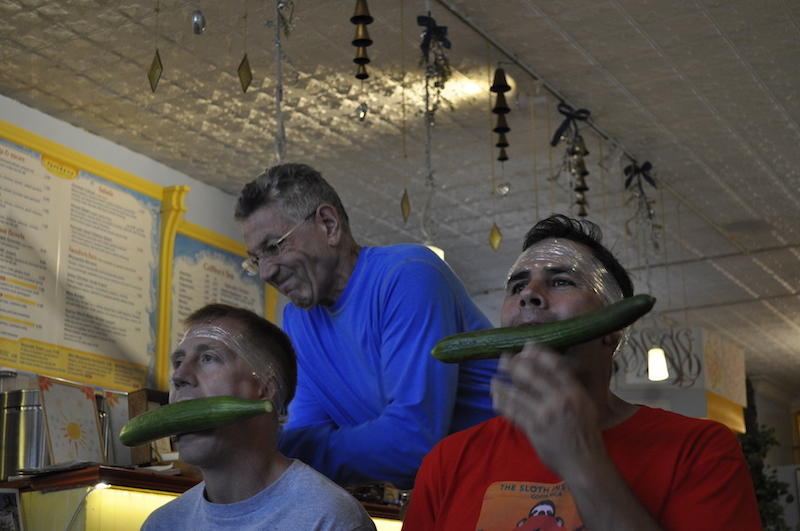 Homagni Baptista quickly reaches out for another cucumber, as the daunting sword of Ashrita gets once more time ready to cut through the vegetable. All of the participants need to be in full and perfect synchronicity if they wish to surpass their previous attempt, which requires them to hack a minimum of 47 cucumbers per minute, or a single cucumber per 1.27 seconds. “This record in particular is a (personal and collective) challenge because it requires you to maintain control and complete focus,” said Homagni moments after the achievement. 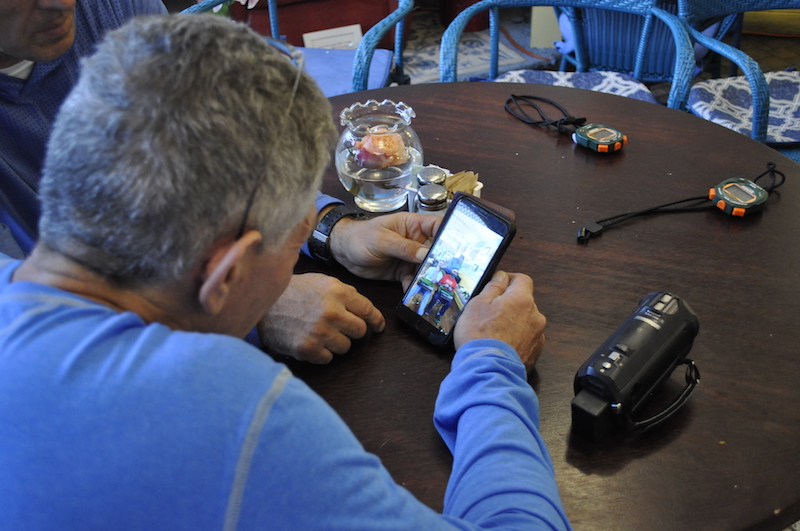 Followed by the action, Ashrita re-counts the number of valid-sliced cucumbers in a minute. After watching the video multiple times, he settled for a grand total of 50 cucumbers. This number needs to be first checked and confirmed by Guinness’s judges, who are going to peruse the footage in slow motion, before they officially declare him the one and only holder of the record. 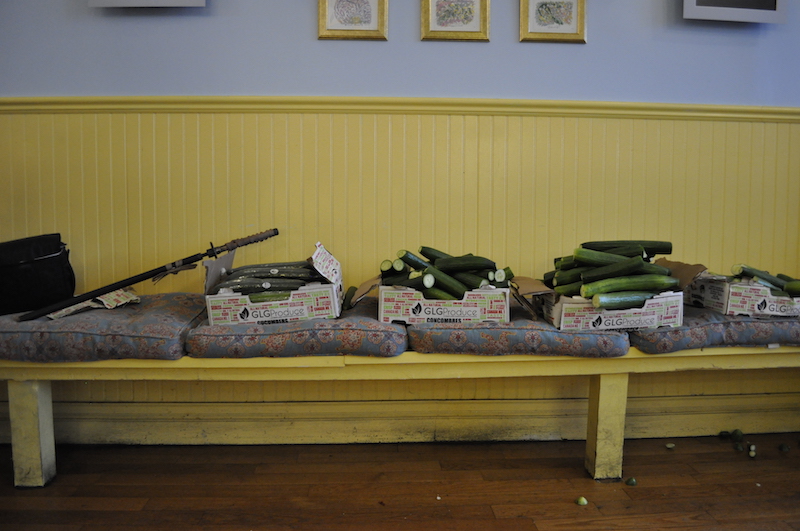 Ashrita’s sword rests against the green corpses of un-edible cucumbers, captured for posterity as they are about to be carefully disposed in multiple garbage bags. 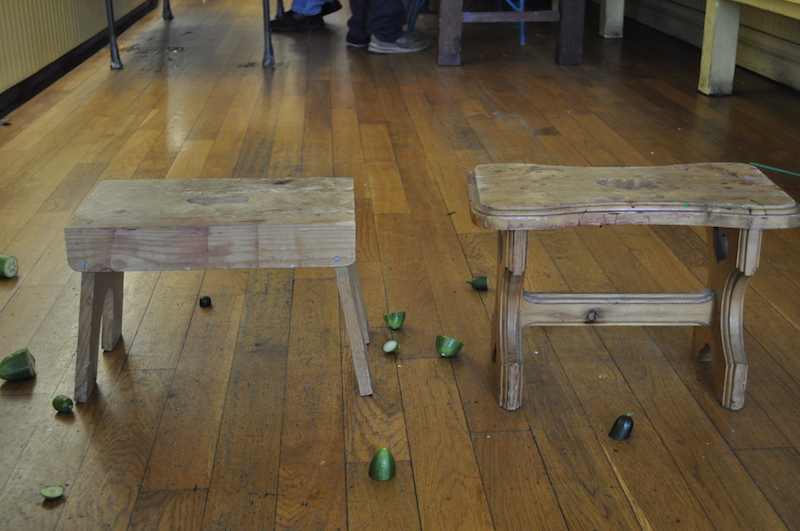