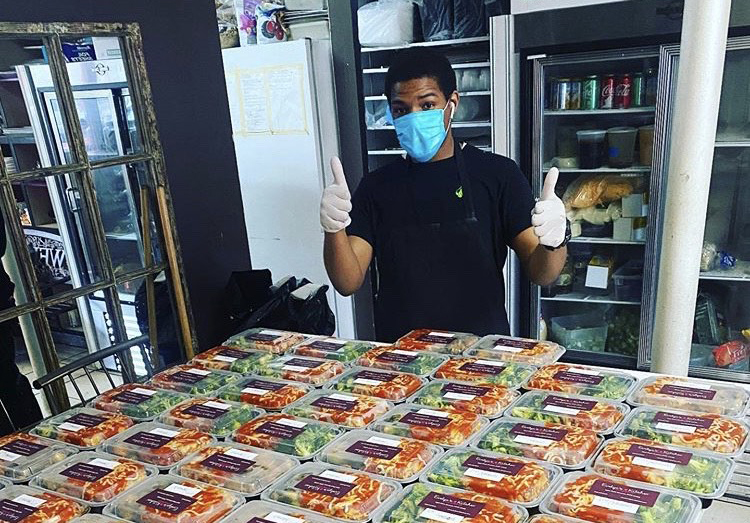 Story and photos by M’Niyah Lynn

When she was 11, Ayala Donchin created her first business—a dessert-making venture—as a way to raise money to attend Camp Somerhill, a sleep-away camp, in the Adirondacks.

Now, she’s the owner and executive chef of Evelyn’s Kitchen, a bakery, cafe and catering company, and struggling to keep her East Harlem business alive.

Donchin emigrated to the U.S. from Israel in 1962 and grew up in Illinois.  She has fond memories of cooking with her parents who instilled the values of spending time with family. and sharing food and laughter.

Before founding Evelyns, Donchin served as an Executive Director of three non-profit organizations. She also worked in community relations for the New York Knicks and helped run a marketing firm, The Sandbox Inc.

However, she always wanted to do something in the culinary field. Donchin felt compelled to create a business after a guest at her 40th birthday party hired her to cater VH1’s Hip Hop Honors event and she realized her food was a hit.

Donchin opened Evelyn’s Kitchen, in 2009, on First Avenue and 118th Street in East Harlem, a low-income, but gentrifying community. The neighborhood is predominantly Puerto Rican. The median household income is approximately $30,608 and over one-third of the resdeints live below poverty, according to the American Community Survey data from the Census Bureau.

Whether you’re looking for $17 sriracha wings or a $5 slice of German chocolate cake, Evelyn’s Kitchen offers a variety of lunch, dinner and dessert options. Customers can order catering services online.

Prior to the pandemic, Evelyn’s Kitchen was bringing in $1.85 million in annual store revenue, according to ReferenceUSA. She also employed nine workers who make and deliver made-to-order meals.

Like many small business owners, Donchin was forced to close her business temporarily, on March 17, because of the coronavirus. Because she couldn’t pay her bill from  US Foods, a food service distributor with which she has an eight-year relationship, they placed a hold on her account.

When Evelyn’s closed “we didn’t know if it was for a week, a month or forever,” Donchin posted on the company’s Facebook page on March 24. “So we depleted as much of our inventory as we could. We donated meals. We had no idea what our next step would be. It was terrifying,”

On March 26, Donchin announced in a Facebook post that she had paid the US Foods bill in full, which lifted the hold.

By early April, Donchin saw a way forward. She worked out an arrangement with Parenthood Together, an organization that has pledged to feed workers using small businesses to send meals to hospitals and families that need support. So doing, she could keep her team fully employed and reopen the cafe.

Donchin also partnered with DeAndre Jordan, a professional basketball player for the Brooklyn Nets, to provide meals for families.

Donchin applied for a Payroll Protection loan from the federal government, and finally received her check on April 30. It helped her “get some breathing room,” she said.

Since reopening, customers are allowed to buy food via curbside pickup. Customers also order their food from services like GrubHub or UberEats, and have it delivered to them.

“I order from the restaurant all the time. I think it was like last weekend that I tried the jerk shrimp and I liked it,” said Jada Reynolds, 17, a local customer.

“We’re open for business. Because comfort IS our business,” Donchin said on the company’s Facebook page.

Donchin does deliveries for the needy on weekends. Her first delivery was for  75 meals to Mount Sinai Hospital on April 5th.

“We’ll keep doing this as long as it’s needed or as long as we can whichever comes first,” she said. She believes that lending a hand is also a way of giving her staff purpose.

Donchin has worked to ensure the health and safety of her workers. She said her employees “sanitize obsessively,” and wear masks.

“We have placed tables in front of the counters to ensure there’s a 10-foot space from our team,” she said.

Post coronavirus, Donchin is unsure how she sees her business moving forward. She says she is still working on a strategy.

“There’s so much unknown for all of us, it’s just important to lead with grace and kindness and a generosity of spirit,” Donchin said.