“… a man’s wife is the show window where he exhibits the measure of his achievement… . The biggest deals are put across over luncheon tables;… we meet at dinner the people who can push our fortunes… . The woman who cultivates a circle of worthwhile people, who belongs to clubs, who makes herself interesting and agreeable … is a help to her husband.”

As housewives, women in 1950s had a “fantastic” lives often depicted as ” Perfect American housewives.” They were presented as loving and caring mothers and wives hoping for suburban houses and life with many children. Women had very simplified lives with the of feeding the family, cleaning the house, cooking and taking care of a family. They were pretty much fulfilling the role of being “woman” and a “housewife” which at that time, socially constructed, meant devoting their lives only to a family, but thinking outside of the home life was very much restricted by the dominance of men. 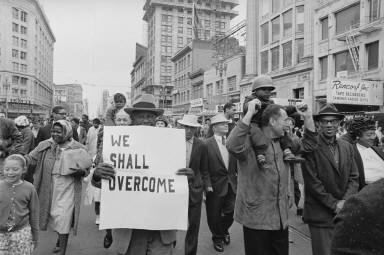 During the years 1950’s and 1960’s, black Americans arose as one “big family” led by racial equality and unfair civil rights. The movement was characterized by major campaigns of civilresistance. Between 1955 and 1968, acts of nonviolent protest and civildisobedience produced crisis situations between activists and government authorities.For almost 100 years after the Emancipation Proclamation, African Americans in Southern states still experienced “unequalness,” disenfranchisement, segregation and great volume oppressions towards blacks. In the following, civil rights activists extensively continued to protest for their freedom and whites, on the other hand, were fierce because the whole community of blacks marched boycotting on the streets in a either violence or nonviolence way depending on a leader. Many leaders from within the African American community and beyond rose to prominence during the Civil Rights era, including Martin Luther King, Jr., Rosa Parks, Malcolm X, Andrew Goodman and etc.   Two arising leader powers such as Malcolm X who was a black male activist leader fighting for blacks’s present and past where as Martin Luther King who also was a black male who fought the idea of “peacefulness” and solving any conflict with love and care. Even thought they had totally different approach towards civil rights movement, white privilege and racial inequality, they both centered the question to where is respect for humanity disappear. A key factor in the success of the civil rights movement was the choice that radicalized African-American organizations offered to cautiously slow-moving governmental policy-makers: the rhetoric of “Black Power” or the pacifism of Martin Luther King Jr. Policy makers chose the leader representing peaceful change.

” I’m curious what makes you so Fight to death: Monstrosity of Calvin Candiecurious”  Django Freeman

This scene involves such characters as Django, Dr. King Schultz, Calvin Candie and Leo Moguy where Calvin Candie relishes a fight of  two “blacks”  that purposes to gratify “whites.”  This is when  Calvin Candie invites Dr. King Schultz, as businessman, and Django as Shultz partner to savor the fight first, then talk business. In the whole movie, Dr. Schultz as well as in this scene plays an astute orator who fools everybody to his advantage. On the other hand, Django Freeman, a man who’d been enduring for being “black” all his life and seeking for his wife. From my perspective, this fight scene has such a crucial use of slaves that blacks are presented as OBJECTS,worse then  dogs.

Another imperative actor is Calvin Candie who plays a critter of beast maltreating blacks mercilessly. By including this character, Quentin Tarantino, a writer and director of this movie, is trying to depict the slavery in clear sense. He was his audience to feel how blacks were denied the humanity. He tries to display that  as a privately owned, a slave was equal in status to a horse or even cart.For that he involves Calvin Candie for whom there was little to diminish blacks, it was necessary for him, according to the French observer of American life of Alexis de Tocqueville, “deprive slave desire for freedom.” Undoubtedly, Quentin Tarantino controversially challenges his audience throughout the movie.

“Whenever I hear anyone arguing for slavery, I feel a strong impulse to see it tried on him personally.”  –   ABRAHAM LINCOLN, speech, Mar. 17, 1865