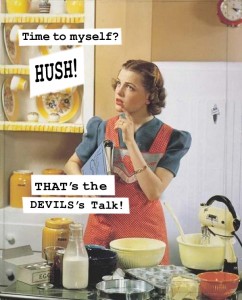 A modern day satirical picture that captures many of the confining aspects of life for women in the 1950s.

These are the three qualifications of an “accomplished” woman that mask the undeniably sinister oppression of women in the 1950s. Far From Heaven uses the character of Cathy Whitaker as vessel to personify the invisible prison that women of the era found themselves in. Cathy is the quintessential good wife; she takes care of her family, adapts to any of her husband’s needs, and never questions the order of society. Cathy is an individual but social conditioning has morphed her into the 1950s version of a Stepford wife. It is nearly impossible for her to even attempt living an “authentic” life, because the man she has built her life around is slowly ripping apart her “ticky tacky” home, and she is forced to watch her life crumble whilst sitting to the side with a forced, meaningless smile on her face.

Despite being a product of the methodical and patriarchal minds of the era, Cathy does manage to build one authentic relationship in the movie. However, it is through this unusual, yet admirable, relationship that viewers are made aware of how severe and confining social roles are in the 1950s. Raymond Deagan, a black gardener, enthralls Cathy with his initial fearlessness of prejudice, and willingness to have an honest conversation. Raymond’s display of genuine concern for Cathy’s wellbeing and happiness is a complete contrast to her life as Ms. Magnatech. Cathy’s friendship with Raymond is the only healthy, honest, and comforting relationship she has ever had with someone. Yet just as Cathy begins to explore her personal desires she is met with a wall of hatred and conformity. She is viciously stripped of all the important relationships in her life, and is left to raise her children in a white man’s world. The oddest, and possibly cruelest, part of Cathy Whitaker’s entrapment is that within this patriarchal society her most merciless attackers are women. Cathy Whitaker may have been the image of feminine perfection, but the filmmakers of Far From Heaven end the movie with a lonely and helpless Cathy. Behind their masks of satisfaction many women of the 1950s were just like Cathy; they were powerless and scared.

“A great number of southerners at all times held the firm belief that the negro population was so docile, so little cohesive, and in the main so friendly toward the whites and so contented that a disastrous insurrection by them would be impossible. But on the whole, there was much greater anxiety abroad in the land than historians have told of…” – author, Ulrich Phillips (174)

Following years of ruthless oppression and living each day under the fear of a whip, slaves were treated as broken animals; they were trained and disciplined to obey their owners. Slave owners refused to consider the possibility of a slave uprising. Slaves were not acknowledged as human beings with emotions and the capability to think like white people; they were “its”—pieces of property. With this twisted value standard for slaves engrained in Southern culture it is no surprise that slave owners fooled themselves into thinking slaves would endure the unforgiveable trials they were forcibly subjected to. However, under the façade of power and confidence, southerners knew that slaves were just as capable as them. The looming fear of rebellion was widely unacknowledged, so as to prevent slaves from gathering courage from the stories. But the stories were also kept under wraps to preserve the illusion of white supremacy over the enslaved black men and women in the South.