“It was a strange stirring, a sense of dissatisfaction, a yearning that women suffered”

After World War II millions of women lived their lives in the image of those pretty little pictures of the American housewife. Their only dream was to be the perfect housewife and mother, yet they were still not happy.

In “The Feminine Mystique”  Friedan describes a women’s unhappiness with the problem that has no name. She associates the problem with the idealized image of femininity that she refers to as the feminine mystique. Friedman claimed that women were encouraged to enclose themselves to the narrow roles of mothers and housewives, giving up  education and careers in the undertaking. Friedan proves that the feminine mystique denies women the opportunity to develop their own identities, which can ultimately lead to problems for women and their families.

The quote shows that women were not satisfied with their role in society anymore and wanted more in life.  Women had a new life plan including not viewing housework as a career; not trying to find total fulfillment through marriage and motherhood alone; and finding meaningful work that uses the woman’s full mental capacity. 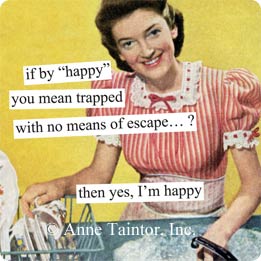 “Her husband comes home for lunch almost every day and Marge makes it a point, whatever her schedule, to be there too”

In this issue, Live Magazine promotes the woman’s role as a home manager, a mother, hostess and useful civil Worker.

After the end of WWII, prosperity had a real influence on the transformation that women’s role had in the society. Women were encouraged to return home and were now seen as only wives and mothers.

This quote shows how a woman was expected to be the perfect housewife in this era.
Mrs. Sutton is called as “lucky”, she has children and a husband who earns enough to support she and her family. Nevertheless, in this article Marjorie is also called as a civic worker because she participates in the community during her spare time, and most of all she supports her husband in any of his civic interests. But, this is only a surface.
Women as Mrs Whitaker or Mrs Sutton were required to be voiceless, with the exception of supporting their husbands. Even though, this article highlights Mrs. Sutton’s active life, it clearly shows how a woman was unable to acquire her independence that she used to have. Women were depending on their husband’s earnings and thus were mentally imprisoned to correspond to the traditional cliché.

This quote called me out because it is something that would be surely uncommon to read in a contemporary woman’s magazine, in order words, you don’t preach that you “wait” for your husband to come home. In fact, nowadays, magazines which aim the female audience definitely promote their independency as wives and/or mothers.