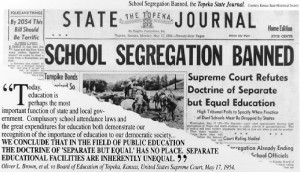 Due to this so called concept of “separate but equal” the lives of African Americans and their futures were greatly impacted.  This form of segregation was seen in the education system, which this case delineates.  As Chief Justice Warren makes his point clear on the different types of education was provided for whites and blacks was clearly not the same.  Based on the fact that most African Americans had been illiterate, it shows they were not given the proper education that they deserved.  In regards with the Fourteenth Amendment, “no state shall make or enforce any law which shall … deny to any person within its jurisdiction the equal protection of the laws.”: this was a clear violation, depriving the youth and the future of society of their innate equal rights.  These separate educational systems proved to be corrupt, and this sense of “separate but equal” is truly unequal and an encroachment of peoples basic rights.   Through Chief Justice Earl Warren’s incisive governance this issue, the Court acted in a unanimous decision which held that racial segregation of children in public schools violates the Equal Protection Clause.