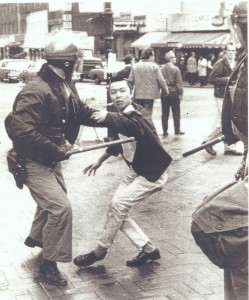 Richard Aoki (1938 – 15 March 2009) was an American civil rights activist and was one of the first members of the Black Panther Party.

The Asian American movement began in the late 1960s and early 1970s during one of the most tumultuous eras in post-WW2 history. In the Bay Area, the Year 1968 marked a wave of Asian American activity. Three distinct Bay Area events earmarked the beginning of this local movement.

1. The 1968 formation of the Asian American Political Alliance in Berkeley.

As with other social movements of the 1960s, the Asian American Movement owes a debt of gratitude to the Civil Rights movement for exposing the gap between the country’s image of itself and reality of how it treats its citizens: Instead of a land of equality where a person could achieve success trough individual effort, the United States was criticized as a land of inequality where racial discrimination degraded African Americans and other people of color. In fact, the AAPA got its roots from the Black Power movement.

Asian Americans crossed the color line to embrace the ideals of the civil rights movement. Out of a sense of moral outrage, they participated in efforts to eliminate racial discrimination and segregation of blacks from the rest of society. But in working to attain legal rights for African Americans, they came to realize that the struggle for social justice in America was more than an African American and European American issue; it involved other people of color. Asian Americans too faced discrimination ad prejudice; as a group, they too had been victims of institutionalized racism and had been excluded from mainstream society.

Below is a poem that was found while researching the Asian American movement. <http://aam1968.blogspot.com/>

You Hadda Be There.

The Sixties and Seventies, I mean.

You had to be there, sensing the world turning upside down.

It wasn’t remote or academic at all.

On our TVs and in our newspapers we witnessed Asian faces rising up to finish off the latest colonial occupation.

An entire quarter of humanity,

once dismissed as clinging to a colorful past

while waiting for some foreign missionary power to take it under its protection,

had now stood up,

an enormous Red banner of self-determination.

and had to decide for himself what the world was about

and where he stood in it.

Political assassinations that shocked the nation and sparked frightening riots happened right here in our own cities.

There was no irony in a militant Black Power salute