Between 1968 and 1973, numerous gangs emerged that altered life drastically in the Bronx. To be caught in the wrong part of town without backup was a high-risk, it was a rule of thumb that you stayed within the boundaries of your own neighborhood. Education was insignificant to existence in the Bronx, and more time was spent trying to complete gang initiations than completing high school. Distanced from the ideologies of the late 50’s and 60’s these young folks did not care about desegregation and politics. Being in a gang meant brotherhood and protection of their own turf from other gangs, which was more directly beneficial to their lives. It can be argued that the development of gangs in the Bronx prolonged it’s lack of progress.

Chang brings to light actions taken by the gangs of this period that contributed to the borough in several ways. Young people living in unstable homes, as well as immigrant and foster children who did not have the guidance of an adult in their lives, sought refuge from the harsh conditions of the streets with help from gangs. Gangs provided these minors with a sympathy, security, and a place to sleep. This population of lost children was in the thousands, and with the help of gangs they were able to unite and fight against common enemies. Eventually these gangs were considered the overseers of everything that happened in the community. According to Danny Dejesus, a Savage Skull gang member-“before they would go to the local police, the people would come to us to solve their problems.” (pg. 49) Gangs also participated in an operation to promote health care, stealing and making use of an x-ray truck for free services. They took it a step further by completely taking over a hospital in their neighborhood, and effort which rival gangs linked together as defense against the police. Gangs also declared war on drug addicts and dealers as they attempted to reduce burglaries (crimes addicts are most prone to) by purging the streets of junkies and their suppliers. In this way, gangs did the “dirty work” of the police who failed to take action. They did this at first by giving twenty-four hour warnings to leave; things then became violent when a junkie stabbed a fellow gang member, causing the “Junkie Massacre.” Gang activity during this era may have been fueled by their revenge against society for leaving them in the dark. However, it can be argued that some of their endeavors were consequentially helpful to their city. 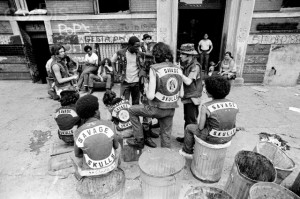