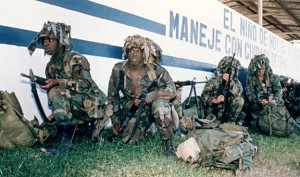 Chapter 17, titled “I’m Running Out of Demons” is a quote from Colin Powell which accurately describes the attitude evoked by the “new world order” that began at the anticlimactic end of the Cold War. The end of the Cold War freed the United States from a forty-year battle with the Soviet Union which international relations were structured around. The war ended in a manner that left Americans feeling uncertain in two ways. The fact that the end of the Cold War came as a result of their own demise rather than by direct U.S. action made it unclear whether or not the finale could be considered an American triumph. Also, with no remaining definite enemies to tackle, Americans were uncertain about what was going to happen next. What eventually happened next was the election of George H.W. Bush, who truly believed that the Cold War was a victory, and was determined to make his mark through foreign policy. Bush was a supporter of the use of force and occupying an enormous military. He was finally able to take part in foreign relations with the invasion of Panama. Tensions rose with leader  Manuel Noriega, who originally had been employed by the United States. When he became involved with arms and drug trafficking after forming an allegiance with Cuba, he became seen as unnecessary and was planned to be removed from office. When the U.S. attempted to replace Noriega he nullified the election that would have replaced his leadership, causing hostility. After an incident in which Panamanian soldiers killed an American soldier and abused an American couple who had witnessed the murder, the Bush administration called for an invasion, led by 27,000 soldiers. Noriega eventually surrendered, and the invasion, also called  “Operation Just Cause” was a success. The strength and swiftness of the United States army were proven during the invasion, making a spectacle of its technological talents and its ability to evade the entire country in the nick of time. The success of Operation Just Cause assisted the image of force military action and helped pave the way for future larger military operations, more specifically, the Gulf War. Bush’s “new world order” provided a new landscape for international relations, and according to Freeman, “Rather than a new world order, global disorder became normalized, as even relatively small groups, through low-tech terror tactics and guerrilla warfare, found that they could disrupt less developed and even advanced societies…Rather than a sense of security and peace, the end of the Cold War ushered in a period of unsettledness, at home and abroad.” (415)