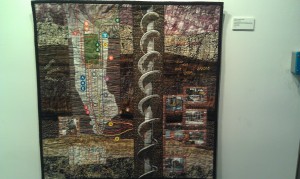 There are over 5,000 art exhibits all over New York City. The exhibits featured in New York cover a wide array of artist’s visions captured in different form from paint, to marble, to clay, and so on. But one exhibit that is completely unique in the way artists capture their visions is located right in the heart of Chelsea New York in a quilt store.

City Quilters is the only quilt store in Manhattan and one of the the only places where you can find a quilting exhibit featuring artist’s vision captured on fabric.

Urban quilting is a new type of art form that is slowly sweeping its threads across the boroughs of New York City. Quilting usually has the preconceived stereotype of being done by older women and with the same geometrical patterns repeated over and over again.

What is striking about urban quilting is these norms are avoided at all costs, and a new abstract feeling to the quilts is brought about.

Quilt art took off back in the 1970’s where the baby boomers were exploring new and different ways of expressing their creativity though art. Once the decade of the Hippies was over, the notion of quilting as an art form slowly died out.

“I started quilting in 1974,” said Diane Rode Schneck a New Yorker and Urban Quilter. “The bicentennial had an exhibit back then which caused quilting to become more popular. Nowadays I see this art form becoming more and more recognized and practiced throughout New York City which is a great thing.”

New York’s Urban Quilting scene takes on different varieties of colors, fabrics, and just about anything you can find to put into a quilt. The main difference with Urban Quilting and regular quilting is the sheer fact that the color black is used in basically every urban quilt.

Black is among the favorite color of every New Yorker. So it comes to no surprise that these quilts sport such a color. This dramatic change in the normal color scheme of a quilt is just one of the many differences that make up what Urban Quilting is known for today.

“The strangest Urban Quilt I’ve seen would have to be this one quilt with a real dead bird right in the center of it,” recalled Judy Doenian.

Urban quilts feature anything that is well, urban. One quilt seen by Cathy Izzo was even made completely out of condoms. The urban feel of a quilt can vary depending on materials, fabrics, and threads.

City Quilters has just undertaken a great obstacle, opening the first quilting art exhibit in New York City. Both Dale and Cathy presented the idea after they realized art could be expressed in any form, so why not express this art in quilt form?

As of now the art exhibits have been a huge success. In the past four art exhibits there were quilts produced by many different quilters. Now the exhibits are looking for just one single quilter to present an entire showcase to the store.

The quilts range in price from $500-$5,000 dollars based on the quality, fabric, and time put in to make the quilt. One quilt in this month’s exhibit features Madonna on a quilt. Some quilts are more abstract while others are more of the quintessential quilt.

“We have all sorts of clients coming in,” said Riehl. “We have journalists, lawyers, men, women, teenagers. Urban quilting is really coming along in the New York City area, and that to me is a very good thing.”

Urban Quilting is also a form of relaxation, meditation, and self-expression. For those who do quilt, quilting takes the edge off of a long day, as would yoga.

“It allows me to clear my mind completely,” said Kacey Herlihy, a student at Baruch.

With all the hustle and bustle New York City provides each New Yorker everyday, Urban Quilting has now become one of the art forms and meditations people use to become whole.

All an Urban Quilt needs is a bit of fabric, two or three spools of thread, and a bright imagination.