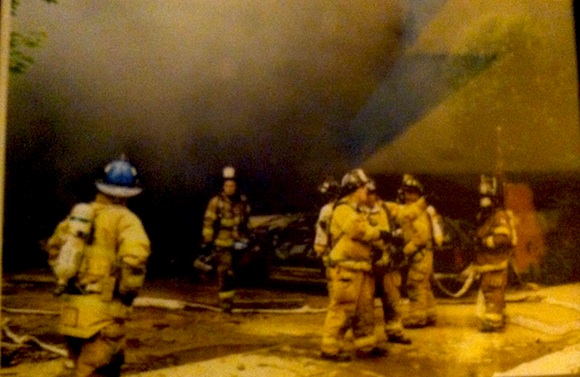 Waiting anxiously for her dad’s return was nothing new to Devyn Scherback, age 19. She was used to this feeling. Sitting at dinner and having her Dad run out of the house mid-bite and not know when he would return was something that happened often. This common occurrence was not because he was an absent father, but because he was a local hero. Dennis M. Scherback, age 55, is a Chief at East Farmingdale Fire Department. Recalling the night Hurricane Sandy hit, Devyn Scherback said, “ For us, it was a typical night you know, except my nervousness was a bit heightened. I remember texting my friend, who is the daughter of another one of the chiefs in the fire department, telling me that her father had just came home from a call, and that they were literally swimming to a house fire, and it was one of the craziest nights they had in awhile. That’s when I truly was nervous for my Dad and his own safety; he’s always too busy worrying about everyone else’s.”

Hurricane Sandy was a devastating time for Long Islanders in late October. From loss of power to even the loss of loved ones, Sandy did not take it easy. Residents all over the island suffered, and some are still suffering today. For many, their hometowns seemed almost ghostly, with no lighting in the streets from no power, wiped out supermarkets, and a shortage on gas. It’s a miracle that most of Long Island is back on it’s feet, but not without the help of many brave and generous men and woman. In East Farmingdale, NY, the fire department not only helped their locals, but others in nearby towns, putting their own families and losses from the storm on hold in order to help others. This act of selflessness, is a characteristic of a hero.

Not only did the Fire Department play a huge role during Sandy, but they did it willingly. All fire departments on Long Island are on a volunteer basis, a fact that many look past. This is not someone’s full time job where they make their salary. This is their second or even third job, one that takes the place of any free time one would have. During the hurricane, these brave men and woman put their best foot forward, coming to the aid of many in distress. Scherback spoke about the difficulty of having her Dad away from her and worrying about his safety during Sandy saying, “ It was hard because my Dad had to respond to calls in areas where people were supposed to evacuate, and they didn’t listen. It was obvious that they had to evacuate for a reason, so it just made me nervous knowing that he was in an area that was potentially dangerous, putting his time and possibly life on the line for complete strangers, while leaving his own family unattended. The feeling of being nervous doesn’t go away until he comes home safe, and I just hope that these people that were helped by all the fire fighters are truly grateful.”

Imagining the thought of being afraid yet prideful of your loved one is a unique feeling, but how does that firefighter know where to go in the first place? We can easily assume that the fire department dispatcher’s calls were nonstop. What about the stress of answering these call- ins, and hearing the concerns of others and being their first call? This job requires patience, a calm personality, and the ability to make quick and efficient decisions. Kimberlee Madden is a dispatcher for the East Farmingdale Fire Department, and was at work the night Hurricane Sandy first hit. Her descriptions of the different types of calls were astonishing, ranging from loss of power for a few hours, floods in houses, to people in hysterics because their house is on fire and they could not get out due to blockage from a fallen tree or anything of that sort. Madden explained that she has seen and heard so many things in her years as a dispatcher, nothing shocks her. She said, “ It’s my job, ya know. Sometimes I may come off as unemotional, but it’s not that I don’t feel for these people, because I do. I just can’t allow my emotions to get involved because then I won’t be able to do what I need to do. I can’t sit there and second guess myself whether I made the right choice to make them a first or second priority. I listen to the circumstance, gather the information, and from there make a decision that will be stuck to. It was just another day at the office for me.”

Although Sandy has come and gone, certain things remain. One being, the sacrifice of these volunteer fire fighters and their families, serving our communities and being our heroes not only during the storm, but at any given call.