Sam Kim’s car has no sign or marker signifying that it’s a cab. There’s no doodad inside keeping track of how far you’ve gone. And he may ask you to sit in the front depending on how many T.L.C. cops are on the streets that night. It sounds shady, but it’s a business that’s been around for decades and almost all the ethnic enclaves have their version of the undercover cab service. Dozens of Korean men like Sam choose to risk having their vehicles taken away, a day in court, and insane fines to work for these car services, most of which are based in Flushing.

A customer who needs a ride to Foxwoods Resort Casino in Connecticut can easily bring in a couple hundred dollars. But there are also nights where you are stuck with local rides that barely bring in 6-11 dollars a trip.

“A job like this is feast or famine,” Sam says. “Still, I was most drawn to the flexible work schedule and even though I’ve been living in New York City for over 35 years and driving for most of those years, this job is giving me a view of my home that I’ve never had before.” 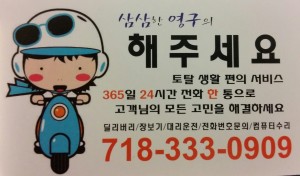 Just the night before, two cars from Sam’s company were seized by undercover T.L.C. agents. “The crackdown is worse than ever,” he said. It’s especially tough when you’re having a slow night as is and have to prematurely head home. “When T.L.C. are out all the guys like me have to wait at the base for who knows how long until the coast is clear. Meanwhile, the few cars with licenses are making a killing because they’re getting all the rides that are coming in.”

Subways may be the lifeblood of commuting New Yorkers but sometimes you’re too cold, too tired, too drunk, or some combination of all three to want to walk to a station and wait for a subway. We’re not quite at drone taxis yet but yellow cabs are as ubiquitous to New York City as pigeons and dirty water hot dog stands. And while you won’t find yellow cabs in Flushing, you’ll find guys like Sam ready to take you wherever you need to go.