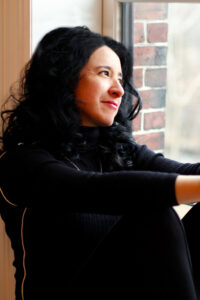 Deborah Paredez is a poet and interdisciplinary performance scholar whose lectures and publications examine Black and Latinx popular culture, poetry of war and witness, feminist elegy, cultural memory, and the role of divas in American culture. She is a co-founder of Canto Mundo, the author of the critical study, Selenidad: Selena, Latinos, and the Performance of Memory (Duke 2009) and of the poetry volumes, This Side of Skin (Wings Press 2002), and Year of the Dog (BOA Editions 2020).  CantoMundo, hosts an annual poetry workshop for Latinx poets that provides a space for the creation, documentation, and critical analysis of Latinx poetry.

From the back cover:

In the tradition of women as the unsung keepers of history, Deborah Paredez’s second poetry collection tells her story as a Latina daughter of the Vietnam War.

The title refers to the year 1970—the Year of the Metal Dog in the lunar calendar—which was the year of the author’s birth, the year her father prepared to deploy to Vietnam along with many other Mexican-American immigrant soldiers, and a year of tremendous upheaval across the United States. Paredez recalls untold stories from a war that changed her family and the US.

Paredez’s work is in dialogue with a lineage of Chicana poets that emphasize feminist readings of the United States as an imperialist and neocolonial power. Chicana feminism engages in the construction of a transnational cross border, anti-colonial discourse, and movement.

In the poem “Self-Portrait in Flesh and Stone” one of Paredez’s intertext is Gloria Anzaldúa’s essay in Spanglish “How to Tame a Wild Tongue” in which she analyzes linguistic prejudices and gender and cultural discrimination in the South West.

HOW TO TAME A WILD TONGUE- G. ANZALDUA

What connections do you think Paredez is trying to make between gender and linguistic discriminations against Chicanas (as presented by Anzaldúa) and bodies’ decay produced by the Vietnam War?

When discussing Paredez’s book of poetry it’s important to emphasize the ways that participation in colonialist schemas provides one means of understanding space (in this case, Aztlán) and reclassifying oneself, albeit temporarily (and with many strings attached), in the “settler-slave-native” triad that Tuck and Yang identify as operative in the U.S., and in settler colonialism, generally speaking (See: “Decolonization is Not a Metaphor,” ).  The overarching premise will be to think of poetry as a medium for inscribing these concepts–mixing discourses, thinking geographically, etc.–in unique and provocative ways.

In her poetry collection, Paredez presents her father and family’s accounts of the Vietnam War and the aftermath but also connects these fragmented portraits with the intersectional activism of students, indigenous, Chicanx, and Black people in the US.

Why do you think she incorporates these poems about mobilization and repression in the collection?  What ideas about the Vietnam War she is trying to convey?