The podcast I decided to listen to is Song Exploder. This Podcast works so well because it is intended for everyone who likes music. You may not be a fan of all of the artists that are brought onto the show but there is someone for everyone as the guest span a variety of genres and age demographics. The format is that of a host interview with the host interview portions taken out so it reads as mostly the artist just talking to the audience. The ad structure is annoying in my opinion because before you even get into the the podcast there are two ads. I could deal with one, but two before we get into things is a little off putting. The show also ends with another add which I don’t mind too much because you can just click out of the podcast at that point. The time that you get to talk to the actual hosts of the podcast isn’t until the last sponsored section after the chunk of the podcast is done and by then I don’t care to get to know the hosts.

This is a very popular podcast that has won many awards and has been raved about. I think the best way to get into this podcast is by looking for an artist and or song that you really like and starting there. For example, the two that I listened to were Grimes and Cat Power who are two of my favorite artists. If you start with someone you care about you will easily fall for this podcast and the more you listen to the more you might even branch out into songs and artists, you don’t know just because you are intrigued by how songs work and how they are built.

The podcast that I decided to listen to for this assignment is called Six Minutes. Six Minutes is a fiction storytelling podcast. There’s 100 episodes in season 2 and each episode is told in six minutes.
This podcast is about an eleven year old girl named Holiday that was found in Alaska with no memory on how she got there by people that claim to be her family while her real family is trying to find her.
I think that the music in the beginning and throughout the episode really brings a sense of the tone of the podcast. Just from the background music the listener can tell that the theme of the podcast is mystery.

I’m Professor Emily Johnson. I’m a multimedia journalist, and I’ve done quite a bit of radio as a freelancer: emilyjreports.com

I’ve also worked as a producer on the Tiny Spark podcast (booking guests, researching and recording interviews), and have just signed on to work as a reporter and producer for an upcoming podcast with Foreign Policy about climate change.

What podcasts do you listen to and why?

What is a podcast?

The origin of the word: iPod + Broadcast = Podcast

Most radio news these days is available as a podcast, but not all podcasts are radio. 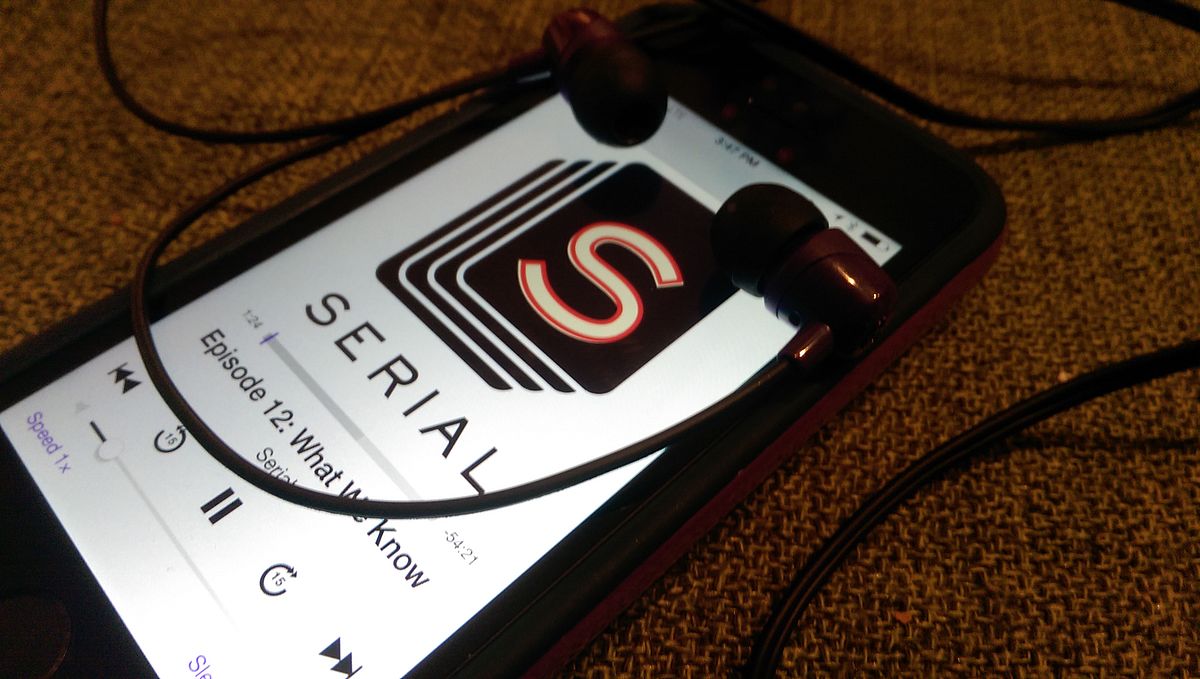 A podcast, simply, is a piece of audio storytelling that you can stream or download and listen to on one of your devices. Often they come in a series of episodes that you can subscribe to. At first, podcasts tended to be simply the downloadable versions of radio programs so people could listen to them at their leisure if they missed them when they were on air. But in the last five years the format has really taken off and become a massive industry unto itself.

One of the pretty great things about podcasts is that there’s a low barrier to getting in on the podcasting game: anyone with a decent audio recorder and a laptop can make one and self-publish it pretty easily. But news publications and radio programs with more resources are also pouring money into podcasting right now, and the results are pretty inspiring: every now and then something comes out that sort of reinvents the form and show how much you can do with this kind of storytelling.

This also means that, despite the struggles that many traditional media publications have faced in recent years, there are a lot of jobs for audio producers and reporters these days.

But the format got a big boost in 2014 with the first season of Sarah Koenig’s show, “Serial,” which reached 5 million downloads faster than any other podcast before it. Now everyone from Snooki to Goldman Sachs has a podcast, and major media companies like HBO and the BBC are upping the game by bringing big budgets and talent to the format.

The number of podcast jobs in New York City rose 33% in 2017 from two years earlier, according to a report from the Mayor’s Office of Media and Entertainment out Monday.

Programs produced by the four largest NYC-based podcasting networks—WNYC, Gimlet, Slate/Panoply and Midroll—saw 1.3 billion downloads in 2016, the report said. That is up sharply from an annual average of 199 million downloads between 2013 and 2015. The top four NYC-based networks produce almost 200 podcasts, employ nearly 600, and occupy nearly 140,000 square feet of office space.

The report called the New York the “podcasting capital” of the U.S.

Though podcasts are provided free to the public, the industry has been successful in raking in earnings from advertising. According to research firm Bridge Ratings, podcast advertising grew 48% between 2015 and 2016, when podcast ad revenue was about $167 million. Bridge Ratings expects total podcast advertisements to bring in revenue of nearly $250 million by the end of 2017 and to hit $395 million by 2020.

Some important podcasts to know:

A podcast from the creators of This American Life, hosted by Sarah Koenig. Serial unfolded one story – a true story – over the course of a whole season. The show followed the plot and characters wherever they led, through many surprising twists and turns.

“The successor to Serial: This nonfiction take on southern Gothic is an unambiguous achievement. Novelistic, ambitious, and breathtaking in its attempt to capture the sum of a single person’s life, S-Town represents a high watermark for an ecosystem already bustling with creativity. That isn’t to say it’s perfect, though. Since S-Town dropped in its entirety in March, a growing body of criticism has targeted the show’s absence of any substantial consideration of race and legacy and the shadows they cast over the community depicted in host Brian Reed’s reporting. The existence of this criticism serves to further elevate the show’s importance to the form: It’s a project that endeavors to grapple with big ideas, only to trigger equally big ones in its wake.”

Additionally, some argued that it was ethically ambiguous. (And yes, someone made a podcast episode about the podcast.)

“Including a piece from This American Life on a list of best podcast episodes is like including the Beatles on a list of the greatest rock bands of all time. It’s a little obvious, but you have to do it anyway. This American Life perfected the art of audio storytelling back before “podcast” was a word in the general conscious, and they remain the most consistent masters of the artform. Their unique sense of balance and fairness was on full display in this year’s “I Thought I Knew You”, which ended up being largely about the Trump phenomenon, and how his supporters don’t fit into anybody’s neat boxes. Not yours. Not ours. Not even their own.”

“This podcast by the New York Times is more than a solid morning-news digest — it’s a huge step forward for the packaging and delivery of news itself. The Daily is a revelation in form and ambition; not only do Michael Barbaro and his team execute emotionally intelligent pieces of audio-first journalism that seize a given moment, they also dare to pepper their dispatches with unforgettable constructions of tape. Two examples stand out in particular: the April 6, 2017 edition that offered unparalleled insight into a meeting between President Trump and Times reporters Maggie Haberman and Glenn Thrush, and the May 26, 2017 edition that closely followed one case of assisted suicide in Canada.”

So far, these are examples of journalistic podcasts with scripting, natural sound, and careful narrative structure. But there are many other kinds of podcasts. Kind of like how there’s an app for everything, these days there’s a podcast for everything, no matter how niche.

The Public Radio NYC Google group. Let me know if you would like to be added. (Be warned… you’ll get a LOT of emails, but you have the option to have them all bundled into one email a day.) Find a podcast that you think is interesting and listen to at least two episodes. Write a short blog post introducing that podcast to the class: Who is this podcast intended for? What style/format is it in (scripted, host interview, a combination, etc.)? What kind of advertising does it feature, and how is it distributed? How popular is it? Has it made waves, either positive or negative? What would be a good episode to start with, and why?