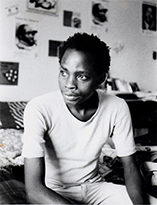 A band of near-molten steel tightens

Around my iceblock head. The clock ticking

Particles under my bare feet. Though noon,

I stand in my nightshirt grinning inanely,

Afraid to draw the curtains on the bright

Nightmare of daylight. The Avenger’s Chariot

And my Amelia in luminous white nightdress

Gasps, lies still. The walls shake to the rhythm of my

Despite his brief writing career and untimely death at age thirty-five, Dambudzo Marechera, the Zimbabwean poet and novelist, remains an important figure in African literature and literary studies in general. While critics have tried to unlock the mysteries of his life – from his turbulent childhood in colonial Rhodesia to his dangerous self-exile in England and emotional withdrawal from the land of his birth – the compelling interest in this writer lies in his radical reimagining of African literature in postmodernist terms, away from the classic realism associated with his predecessors.  A skilled and dedicated student of world literatures, Marechera expanded his artistic canvass by drawing on a variety of stylistic influences including surrealism, Dadaism, the carnivalesque, and hybridity to express his growing sense of vulnerability as an artist and the urgent need to awaken the masses to the abuses of power in the wake of Zimbabwe’s independence from Britain. Resolutely internationalist, he relished his outsider status, homeless but at home in his creativity. The House of Hunger, for example, his first major work published two years before Zimbabwe’s independence in 1980, rejects the demand for linearity in the African narrative of nationhood and instead erupts with conflicting emotions held together by dizzying shifts in style and narrative voice.  The book’s wrenching images of urban despair, coupled with its menacing heights of language, set the stage for the dark mood prevalent in  the author’s later fiction.

Marechera’s brilliant act of rebellion against oppressive systems of power is also given poetic expression in maddeningly unpredictable ways, ranging from   exquisitely crafted lyrics to the avuncular-styled fragments that dominate his poetic canon. Critics generally agree, however, that he has a firm grip on the sonnet form, as illustrated in his “Amelia” poems. In a brief preface to this sonnet sequence, Marechera writes:

How to begin – I have opened the doors and windows and light is flooding in. But does it illuminate what in my head is Amelia? Give loneliness a platform and its speech will be poetry. To become one with another is simultaneously to lose and acquire one’s identity. When I look in the mirror it is Amelia’s face which – in astonishment – gazes back at me.  (Century of Mind, p. 167)

The statement clears the way for recognizing Marechera’s frequent use of the doppelganger or the double, a literary device rooted in German folklore to signify spirit possession. The double has been deployed subsequently by a variety of writers to channel the narrative voice(s).  In this sonnet the motif works to fuse the self (poet), the poem’s “I,” and Amelia, creating a sense of interlinked identities that contrasts sharply with the poem’s haunting images of death, destruction, and loneliness. Rewriting the traditional love sonnet as a death wish, Marechera draws on magic realism to paint a picture of the lover as prey in a nightmarish vision of an attack by supernatural forces.  Everyday material objects in the speaker’s “flat”– the ticking clock, a piece of rusty steel, even the dust – threaten annihilation as certain as the “fiery sparks” from the “Avenger’s Chariot.”  The vivid imagery released by the evocation of mythological figure of death lingers even as the poem shifts suddenly to capture  the changing face of death by machine gunfire in our time: “Gatling guns’ white-hot bullets/Still tear night’s writhing veil to shreds.” On the whole the point is being made that the passions of a man are invariably imperiled by the loved one, shown here as a ghostly figure “in luminous white nightdress/Her small fists pounding my bared chest.”

It has been said that Marechera is at his best in the “Amelia” sonnets. That is a good place to begin a conversation about the poem’s effect on you.  How does this sonnet compare with its Petrarchan or Shakespearean counterpart, for example?  Comment on the portrayal of love in the poem. What impact do the end-stopped lines and other stylistic techniques (such as alliteration) have on the meaning? Does the poet’s biography matter in your understanding of the poem?

Marechera’s statements included above “Give loneliness a platform and its speech will be poetry,” and “To become one with another is simultaneously to lose and acquire one’s identity,” are the great incites both into his intention here and his broader opinion of his craft. Both the individual as speaker and their perspective are given much power in this piece. Mundane items in an apartment are given figurative weight and significant space here by being imbued with both a militaristic and expressionistic perspective. The portion allotted to conveying this perspective begs the reader to examine contextual clues, which Professor Allan has been gracious enough to provide. I believe characterizing this work as Magic Realism is accurate, with the melding of such banal objects, a clock or some dust, with life-threatening qualities, with the speaker’s eventually splintered existence, and with the absolute respect for mythic/supernatural imagery.

I wish to comment on the portrayal of love in the poem, though. The sonnet gains much of its power by confronting a formidable task, writing a socially conscious poem, with great insight on physical intimacy. The sections where this is best addressed include the second quote above, and the poem’s final lines where we are left unsure whether Amelia dies, comes, or is left unfulfilled.

2 thoughts on “Amelia by Dambudzo Marechera”