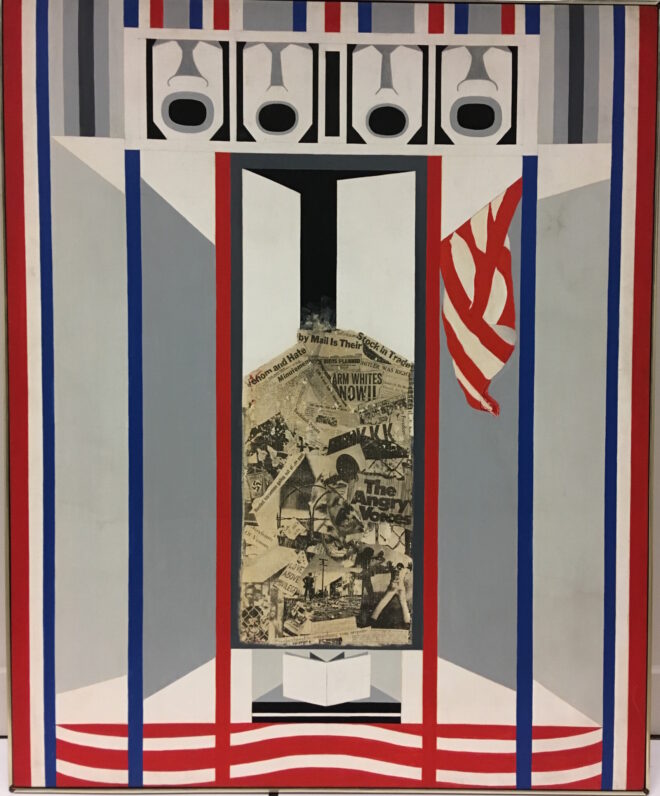 There is very little public information of Mary Ascher’s painterly pursuits. As a middle-aged woman working at the height of social disarray, Mary Ascher clearly developed a painterly language in tandem with the current events playing out in the United States. These paintings are anything but shy. The country was going through disarray with the civil rights movement playing out. The climate was not a peaceful one and these paintings are anything but shy. Ascher acknowledged how painting could serve as a critical mirror to the world. Corridor of Power: Communication, serves as a diary-like account of her life. Ascher acutely examines the language that was floating around in media, and juxtaposes it with paint, combining found print materials with art-focused mediums. Many social and economic downturns trickle their way into the painting. Drawing on newspapers as a resource and deploying it as a material connects the series to larger themes of national identity. Did the land of the free exist? Will such a framework actually ever exist? A drooped American flag hangs to the right of the shredded newspaper. Ascher’s choice of palette evokes an ominous environment. She was precise in her deployment of material, framing techniques, and color choice. The Corridor of Power series is extremely subversive, considering the era in which Ascher was working. All three works presented in this exhibition were made in the mid-1960s as the United States struggled with its own social and political identity. Moreover, the country was in between WWII and the Vietnam war. The United States was implicated in internal and global dilemmas. Ascher pushed the boundaries of painting, asserting it as a platform for internal discoveries as well as critical commentaries on the world.