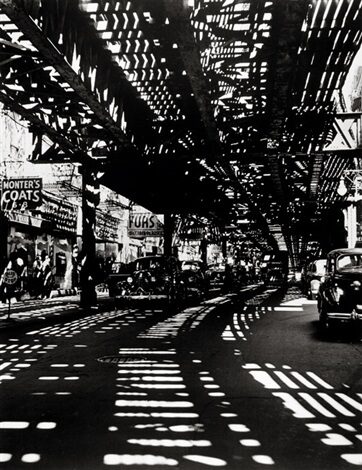 Andreas Feininger is one of the world’s most prolific photographers—a pioneer both visually and technically. Born in Paris, son of the painter Lyonel Feininger, he was educated in German public schools and at the Weimar Bauhaus. His interest in photography developed while studying architecture. He worked as both architect and photographer in Germany for four years until political circumstances made it impossible. He moved to Paris, where he worked in Le Corbusier’s studio, and then to Stockholm before relocating to New York City shortly before the advent of World War II. His New York career began as a freelance photographer for the Black Star Agency and the U.S. Office of War Information. It was as a staff photographer at LIFE magazine from 1943 to 1962, where, he established his reputation for documenting the unity of natural things, their interdependence, and their similarity to constructed forms. “What matters is not what you photograph, but why and how you photograph it,” he once explained.  The why?—his great love for New York—he is noted for his dynamic black-and-white scenes of Manhattan. The how?—his custom-built telephoto lenses and close-up cameras that allowed him to represent scenes in distortion-free monumental perspectives and show small subjects in startling sizes, thereby revealing unknown aspects—as evinced in his numerous black-and-white photos from vantage points all over the city, and this striking photo of the infamous El train. What appears as an image caught happenstance by a street photographer is a studied portrait of patterns of light caused by the sun’s streaming through the railings—