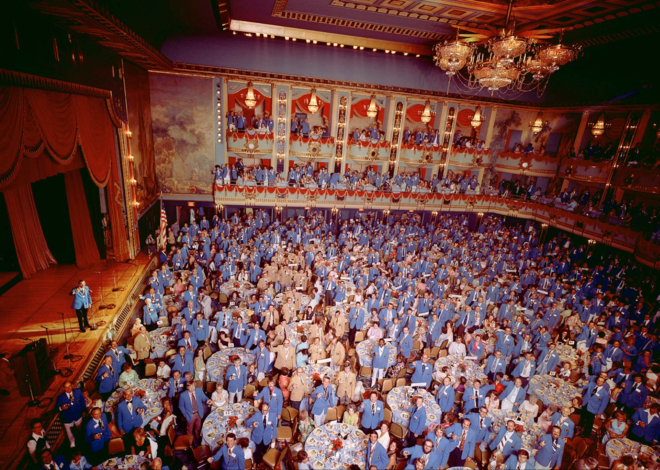 Neal Slavin is an internationally renowned photographer whose work has been featured globally for over 50 years. He has won numerous awards and was one of the first photographers to become a Fulbright Fellow for his work.

This color photograph was first featured in Neal Slavin’s collection When Two or More People Are Gathered Together, where the artist’s goal was to explore how people behaved when they gather together in a group. Many feel the photos in this collection are funny or quirky, but for Slavin, the series is a dive into human sociology. According to the artist, “My role is [to] capture a complete image, incorporating the eccentricities of human behavior that have emerged naturally from the multitude of personalities.” The subjects in the photo knew they were getting their picture taken, but Slavin did not pose them. Rather, he wanted to see how each individual would act as a member of the larger group.

This photo was taken inside the grand ballroom of the Waldorf Astoria Hotel. Electrolux Vacuum salesmen who sold at least $50,000 worth of vacuums in 1974 were honored by receiving a blue jacket. In this grand, opulent space, a sea of blue-jacket-clad men are standing, raising a glass to the camera while their wives sit quietly beside them. For Slavin, this photo is a time capsule, a “sociological document of how we felt at that time.”

The following label was written by Nicole Zakrzewski

Neal Slavin is a celebrated group photographer who has specialized in color film since the early 1970s. This photo is part of his group portrait series, When Two or More are Gathered Together. Slavin’s first group portrait was taken in 1972 of the Flushing Volunteer Ambulance Corps on both color and black-and-white film. It was there where Slavin discovered the complexity of color film, and the context it provided, especially with numerous subjects. Slavin never posed his subjects. Instead, he let the subjects to pose themselves and in doing so showed more of their personality.

Electrolux Vacuum Cleaner Sales Convention, Waldorf Astoria Hotel NYC features hundreds of blue suited Electrolux salesmen, accompanied by their wives who are seated in a dense ballroom celebrating their sales achievements. It’s unknown how Electrolux salesmen were organized, as upon closer inspection a minority of the salesmen are wearing a beige suit jacket, while the rest are wearing a blue suit, additionally a select number of honorees are also wearing medals around their necks. This being one of Slavin’s larger group portraits keeps the viewer engaged, becoming a potential “I Spy” image, as the longer you stare at the photo, the more is revealed and yet more questions arise.