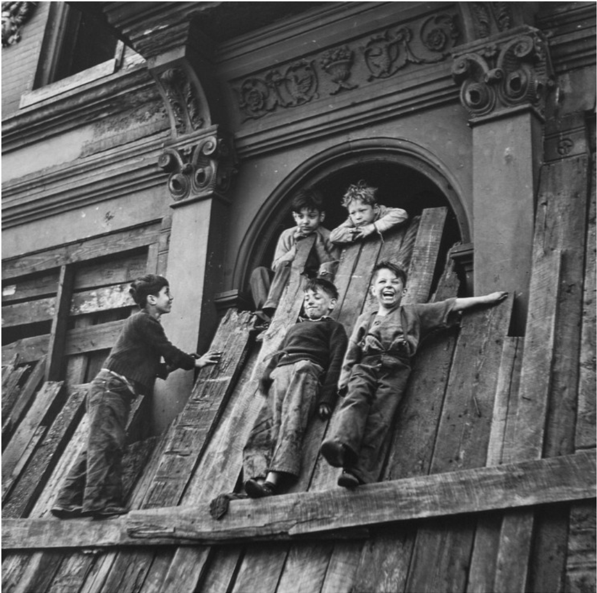 A first-generation American, Jerome Liebling grew up in Brooklyn, New York, during the Great Depression. He served in World War II, but when he returned from the European Theater, he became a fierce anti-war advocate and joined a photography collaborative of like-minded artists. He enrolled at Brooklyn College, CUNY, to study painting and photography but did not long last in the program, dropping out after a year.

After his short stint at Brooklyn College, Liebling would wander the streets of Brooklyn with his camera. Abandoned buildings in his neighborhood of Bensonhurst inspired his art. Some of his earliest work was documenting the deteriorating conditions of the areas of Brooklyn where he grew up. Many photos from these collections feature children playing; they were often poor yet resilient in the face of their adversity.

This photo features five boys playing on the barriers erected to keep people out of the abandoned building, gleefully defiant as they climb and play on the beams. Despite the depressing surroundings and their tattered appearance, the boys are having a blast, unaware that their antics have just been immortalized by Liebling’s camera.