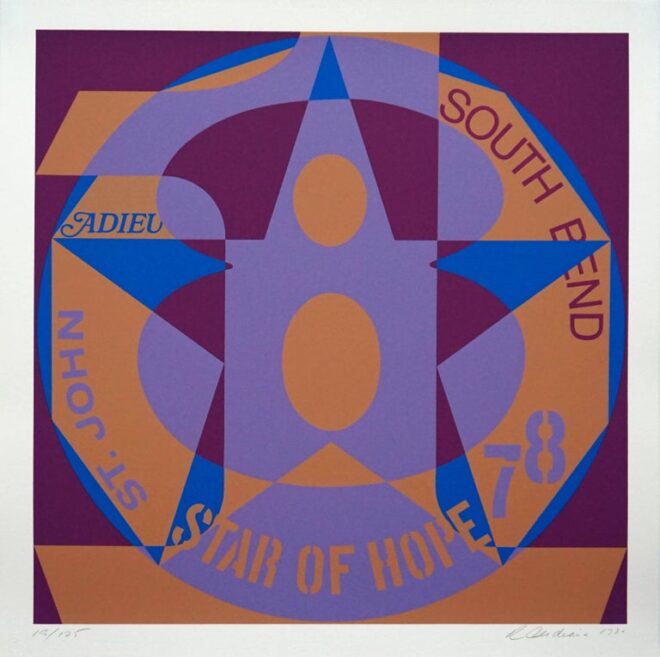 Born Robert Clark in New Castle, Indiana, Clark changed his last name to pay tribute to his birth state. Also, at the time there were two other artists named, Robert Clark and he did not want to cause more confusion. Indiana is best known for his iconic sculpture of the word LOVE, created in 1964 for a MoMA Christmas card. Coincidently, the word ‘love’ was not commonly used in his early years. He rarely spoke of his family’s household. In 2008, he revisited the sculpture’s design with the word HOPE for Barak Obama’s presidential campaign.

This series of autoportraits are considered as part of the Pop Art Movement. Although the movement was thought be kitschy and impersonal, Indiana’s piece is imbedded with personal references. South Bend is a city in his home state where he had fond memories of his childhood. Seen here, depending on the source, the number 8 represents anything from new life, misery or power. While the number 1 typically refers to unity, new beginnings, and like number 8, power. The most prominent image is a star for which Indiana says is “the quintessential American symbol”. The star is surrounded by ten fields of blue, boxed in burgundy. Blue can indicate freedom, burgundy symbolizes power. The five texts phrases are in a variety of fonts maybe marking different eras in his life, he was 50 years old in 1978. The overall theme is possibly, his experience within the power of America.

In 1978 he established his permanent home in a lodge called the Star of Hope in Vinalhaven, Maine, where he died in 2018. Shortly before his death allegations that his caretaker was marketing unauthorized reproductions of his works resulted in a lawsuit. The case was settled out of court in 2020.