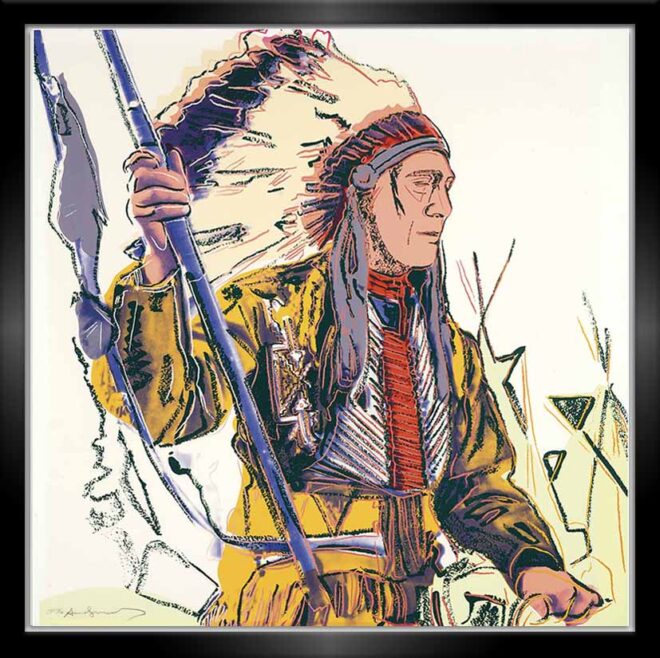 Warhol is famously quoted “If you want to know all about Andy Warhol, just look at the surface of my paintings and films and me, and there I am. There’s nothing behind it.” “Cowboys and Indians” is the last portfolio that Andy Warhol produced before his death in 1987. The title of the series evokes school yard games of make believe. Hollywood portrayals of the Wild West became popular in the 1930s as Warhol was growing up. Warhol himself is thought to be a fan of movie Westerns – in fact, his archive contains 27 pairs of cowboy boots. The aesthetic example of War Bonnet Indian, with the iconic pop art style and pink, purple, and yellow coloring, is the reduction of an entire culture into a theatricalized token character.

While this life-sized image is based off of a famous Hollywood still, it is also the only portrait in the series that is known to have been hand drawn prior to coloring and screenprinting. When compared to Warhol’s Self Portrait, 1979 one can see similarities in the nose, dimples, and jawline of the profile in this screenprint. This series consists of recognizable portraits of well-known Wild West characters like John Wayne, General George Custer, and Geronimo. War Bonnet Indian stands in a unique position among the ensemble because it allowed the artist to play the “Indian.”