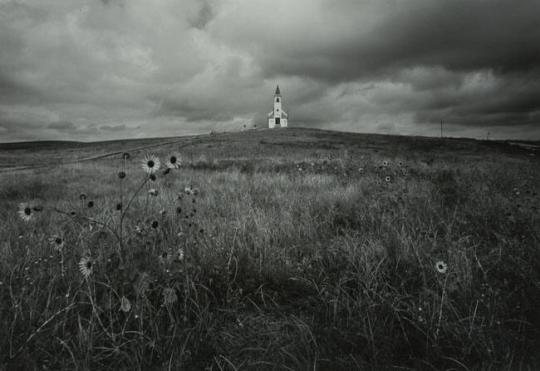 This photograph portrays the former Sacred Heart Catholic Church located on the Lakota Pine Ridge Indian Reservation in South Dakota at the site of the Wounded Knee Massacre where the U.S. Army’s 7th Cavalry slaughtered nearly 300 Lakota men, women, and children. The church, like many others, was built for the purpose of religious conversion and cultural assimilation. As the central focus of this work, the church seems to have its own gravitational force. It seems like everything else in the image is being drawn around it. Dark clouds surround the steeple, giving the church the impression of halo. This perhaps implies some sanctity in the church’s intent. The darkness in the image gives the impression of creeping across the grass toward its center, perhaps emphasizing the dark historic past held within the land. Just a few years following this photograph, in 1973, this ground was once again darkened with Indigenous blood during a clash between U.S. officials and members of the American Indian Movement (AIM) who were present in protest, demanding that the U.S. government honor treaties.

Similar to an earlier print by New Deal photographer John Vachon with the same name, one can easily imagine the photographer taking a casual stroll up the hill toward the church. A young, French immigrant, raised in Hollywood during a film era filled with Westerns and Noir, Elliott is known to have remarked “The work I care about is terribly simple. I observe, I try to entertain, but above all I want pictures that are emotion. Little else interests me in photography.”