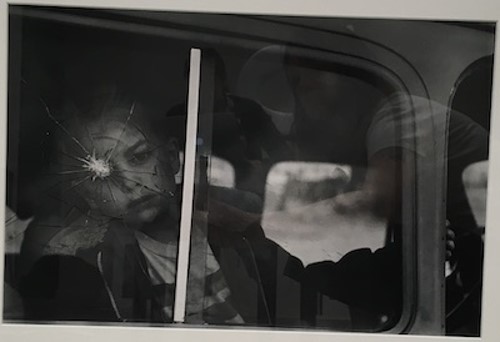 This photo was taken by the French-born American artist, Elliot Erwitt, back in 1955. He is known for black and white documentary photos, which were ironic and absurd scenes from casual everyday settings. He started his photography practice while he was serving in the U.S. Army stationed in France and Germany as a photographer’s assistant. He was influenced by meeting photographers Robert Capa and Roy Stryker when he served in the army.

In this black and white photo, a young boy who seems around 8-10 years old, is sitting in the backseat of a car and looking outside through a cracked window. There is no one else visible in this photo.

In 1955, when this photograph was taken, there was a huge increase of car sales in the U.S., and 7 out of 10 families had a motor car. If a motor car was common in that year, why didn’t this boy’s guardian repair the window, which was a safety issue? The boy in this photo does not wear his seatbelt because it was not required before 1955. It is not common today for a child to been seen sitting in a car with a cracked window and not wearing a seatbelt, but I assume people were not so sensitive about a children’s safety at that time.

I assume Elliott Erwitt was also curious about this boy’s situation and pressed the camera shutter. Maybe he wanted to express his concern about the safety of this child.