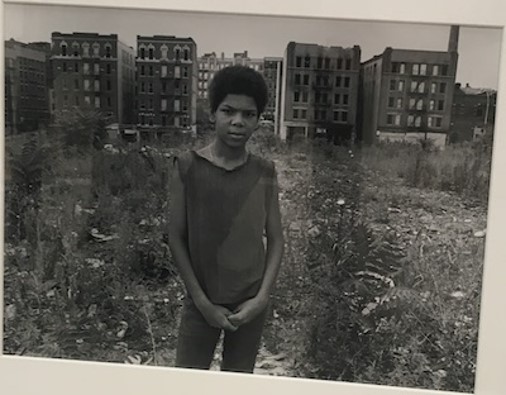 Jerome Liebling took this photo in 1977 in South Bronx, New York.  Liebling is an American photographer who grew up poor in Brooklyn during the Great Depression. He had to quit college to serve in World War II and then returned to Brooklyn College at CUNY to study art and design.

His famous photos are typically black and white and document social issues from the 1950s-1980s. In the 1970s, he took photos of young children who are surviving rough streets in New York City.

The boy in the photo looks like he is around 10-12 years old, who I assume is an African or Caribbean American boy living in the Bronx. In this photo, he is wearing a worn sleeveless shirt and facing the camera straight on. There is no one else in this photo except burnt apartments in the background.

In the late 1970s, buildings in the Bronx were abandoned by landlords and the property values were record as low. There was a famous quote by ABC News at the time, “Ladies and gentlemen, the Bronx is burning”. Many people say that government policies led mortgage lenders to deny loans to people in this area, which allowed greedy landlords to purposely burn buildings to get reimbursement from the insurance companies. Because of this segregated policy, the residents suffered from high crime rates and a lack of safe housing to live in.

Liebling wanted to tell the struggles of young children living in rough streets because he had also gone through difficult times when he was young. He wanted to let the world know that the boy may be living in a poor neighborhood, but he is still a boy with potential and hope.