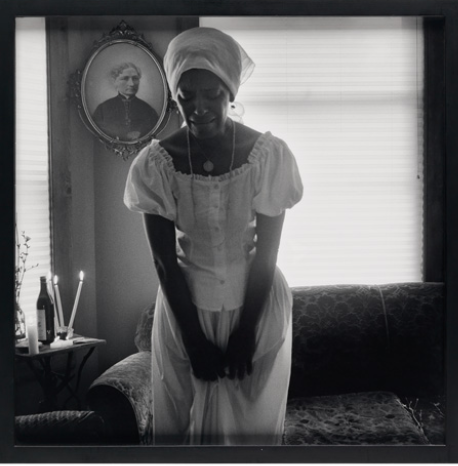 Carrie Mae Weems (b. 1953)
Woman in White
1992
Gelatin silver print and text panel
Percent for Art Program
The Mishkin Gallery
20 x 20 in each

Woman in White is taken from Carrie Mae Weems’ Sea Island Series that captures the essence of nature and livelihood of the Gullah people. The Gullah (Geechee) people are generations of former enslaved African Americans brought from West Africa to work on plantations in coastal areas of North Carolina, South Carolina and Georgia. In the series, Weems portrays the image of the Gullah community, place and tradition. The Sea Island Series shares their culture through folktales and rituals. Woman in White shows the importance of continuing traditional practices as the woman weeps releasing everything that troubles her. The woman’s head is facing down, the camera shot is focused on her crying as her chin is lowered to her chest, grasping on her white skirt for comfort. Dressed in a white top and skirt, hair wrapped in a white linen cloth, this event is a preparation of connecting to her African ancestors. Weems is not afraid to push the envelope, encapsulating art that focuses on activism, cultural identity, sexism, and class. Carrie Mae Weems has received accolades for her artistry that includes the MacArthur Fellow Genius Award in 2013 and a W.E.B Dubois Medal from Harvard University.

“The friction of connecting to our ancestors, misunderstanding the language of the spirits. Calling Africa, but they can’t hear me. I do not know how to say hello to my mother.”