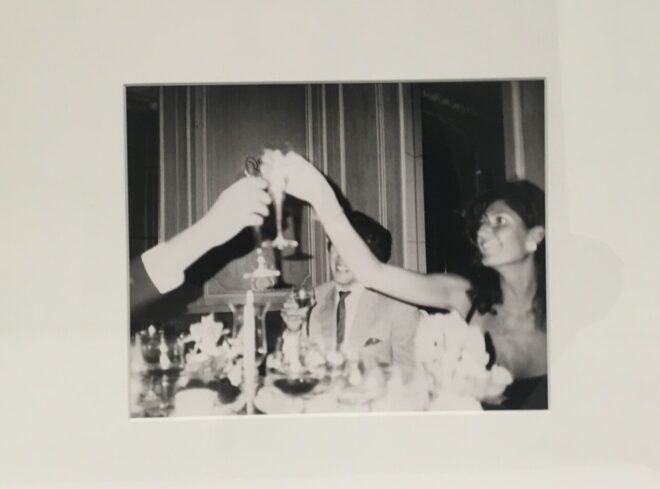 Outside of his pop art screen prints, Andy Warhol was known to carry a camera with him everywhere, and his photography serves as a visual diary. While his talent, reputation and connections granted him access to an alluring New York City lifestyle, Warhol’s camera separated him as a spectator rather than a participant. Vera Iachia and Unidentified Men and Women gives the viewer an opportunity to live vicariously through Warhol’s lens and to join Warhol as a spectator.

Warhol’s Vera Iachia and Unidentified Men and Women captures an intimate, celebratory moment between friends with their glasses raised at dinner. Vera Iachia is the only subject caught in full, while the other two subjects are either out of the shot or masked by their surroundings. Despite Iachia being the only face in full view, the viewer is initially attracted to over exposed arms and glasses meeting in the middle. Iachia and the unidentified man are caught grinning and it’s only fair to assume that the third subject, along with Warhol, are doing the same.

Iachia, now a renowned Portuguese interior designer, started her career after graduating from Parsons School of Design. Afterwards, she went on to work with Warhol, which cultivated her interest in pop art, which remains prominent in her work to this day.