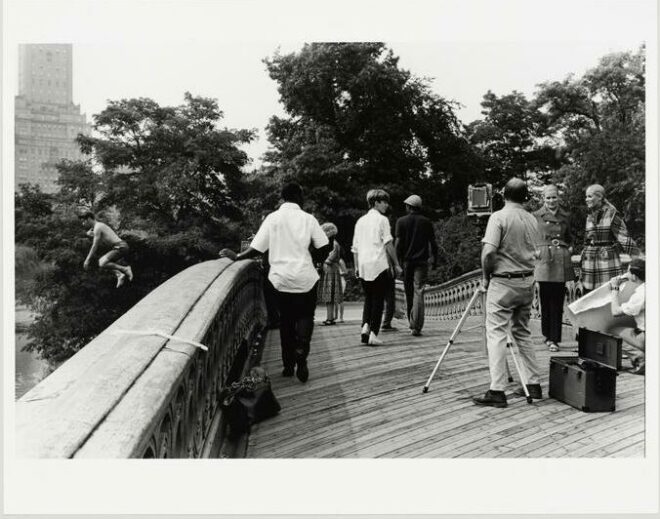 This photograph depicts park visitors enjoying the space in a variety of ways. The scene is lively and relaxed. A shirtless man jumps from the overpass into the lake below. Meanwhile, a young man nearby is glancing at two young women who appear to be models for a photo shoot. Other subjects appear with their backs facing the viewer. I was drawn to the various types of attire and diversity of the subjects. Parks are a highly accessible place of recreation and an important feature of civic life. I chose Central Park because of the simultaneous action occurring in the public space. The photo also was taken at the end of the 1960s, during multiple political movements, and I feel as if the carefree action occurs within the hopefulness many Americans may have had prior to the start of a new decade.

Joel Meyerowitz is a New York native. Born in 1938, he began his photography career in the early 1960s. Meyerowitz was an early adopter and proponent of color photography. He was a Guggenheim Fellow twice and has received awards from both the NEA and NEH. He has published over 30 books and currently lives in New York and Italy.

Joel Meyerowitz is one of the original street photographers who used color film beginning in the mid-1960s. Although Central Park, NYC isn’t one of Meyerowitz’s color street photographs, it still manages to capture subjects who are occupied in their own worlds, yet share a similarity of being in the same location when Meyerowitz took this photo on a bridge one summer day in Central Park in 1969. No single subject commands the viewers undivided attention. On the right, a pair of models pose for a photographer and his assistant in coats, most likely for a later winter magazine issue, while the remaining subjects have more summer-appropriate attire. On the left, a man is jumping off the bridge with a few onlookers, while two others are just simply crossing a bridge.  It’s a perfect shot of an ordinary day in New York City, with each subject engulfed in their own experiences, whether it’s jumping in the past, enjoying the present, or planning for the future. I chose this piece because it captures just a sliver of what Central Park can offer on a summer day.

Coincidentally, later on in his career Meyerowitz was commissioned by the New York City Department of Parks and Recreation to document the city’s parks, including Central Park where this photo was taken. Delineating from his traditional street photography, Meyerowitz’s photos of New York City’s parks chronicled the landscape and fauna which was later featured in his book Legacy: The Preservation of Wilderness in New York City Parks.