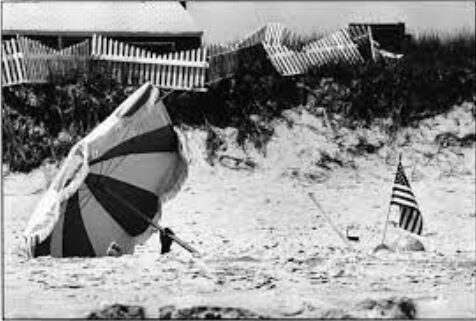 This desolate beach in the Hamptons and partially buried beachgoer invoke feelings of solitude and inner reflection. The image features a repeating stripe pattern both in the American flag and beach umbrella in the foreground. The nearly-toppled over picket fence in the background mimics this stripe pattern. Fences function to exclude, and a fence that is severely leaning allows people to move freely. How are beaches a part of the American experience? Is there an overlap in the symbolism of the American flag and a beach?

Elliot Erwitt was born in Paris in 1928 and moved to Los Angeles with his family in 1942. Erwitt studied at Los Angeles City College before relocating to New York in 1948. In 1953, he was hired as a freelance magazine photographer. He resumed his education at the New School for Social Research (now known as the New School) taking filmmaking classes and worked as a janitor at the college in return. Erwitt embarked on a career in film production in the 1970s, making a series of documentaries and comedy films. Erwitt once said “I’m serious about not being serious.”, and this sense of humor is apparent in his body of work.