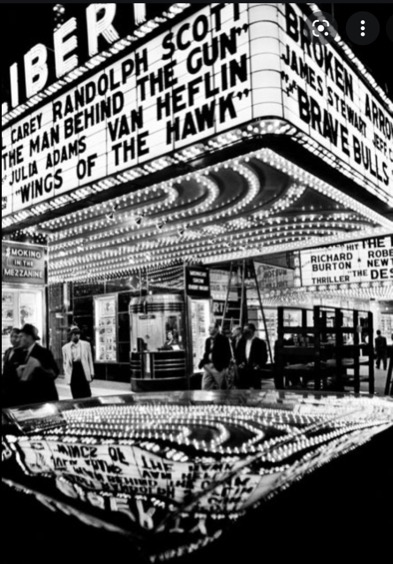 Times Square is captured here at night. This image consists of impeccably dressed subjects underneath the brightly lit marquee of the now-defunct Liberty Theater. The lights of the marquee creates a reflection on the ground below. The image provides a glimpse of the movie theater experience during the midst of the Golden Age of Hollywood nearly 70 years ago. What can you infer about going to see a film in the 1950s and how it may be similar or different to now? How has the Hollywood film industry impacted American culture in the decades since?

William Klein is a Jewish-American photographer. Klein was born in 1928 in New York. At fourteen years of age, Klein graduated high school and began studying at City College of New York until joining the Army in 1945. Klein was deployed to Europe where he studied art and was immersed in the art scene. He later returned to New York in 1954. His photographs have been featured in Vogue Magazine. Klein also published several books and made a series of experimental films in the 1980s before returning to photography. His work has been exhibited in the United States, Italy and Russia. He currently lives in Paris.

Considered to be among the fathers of street photography, William Klein—painter, photographer, movie maker, American-in-Paris, is known for his unconventional style of abstract photography depicting city scenes. A true city kid, Klein was born on April 19, 1928 in New York and grew in its Lower East Side up shuttling between city streets, schools, pool halls and the Museum of Modern Art. At eighteen, he graduated from New York’s City College (CUNY) and, at twenty, after serving for two years in the US Army in Europe, he settled in Paris to become a painter. He worked briefly with Fernand Leger Klein and found early success with exhibitions of his work. He soon moved on to photography and achieved widespread fame as a fashion photographer for Vogue and for his photo essays on various cities.  His work was considered revolutionary for its “ambivalent and ironic approach to the world of fashion”—he photographed models outside on city streets, its “uncompromising rejection of the then prevailing rules of photography” and for his extensive use of wide-angle and telephoto lenses, natural lighting and motion blur—which explains his abstract approach and the painterly like quality of his photos. Wings of the Hawk, taken in 1955 is an example of this. It was taken upon his return to New York to embark on a unique photographic adventure to record on film his vision of his native city in a photographic diary.  The incandescent lights of a movie theater marquis, a mundane and ordinary nighttime scene to most New Yorkers, becomes an abstract mix of lines reflected onto a car roof like the reflection on a pond—the ripple of the aftermath of a rock landing in the water.