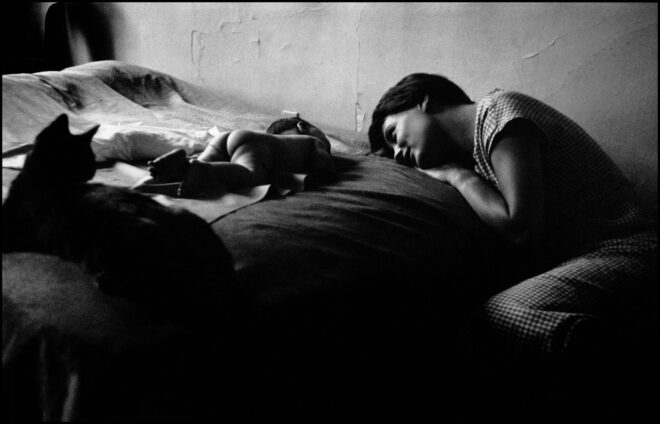 Elliott Erwitt was born in Paris, France to immigrant parents in 1928, and later migrated to the U.S. when he was ten years old. While serving as a photographer’s assistant in the Army in the 1950’s, Erwitt met fellow photographer, Roy Stryker, who introduced him to the documentary photography movement. Erwitt used the documentary method to capture the candidness of everyday life, while also sparking the viewer’s curiosity to know more about his subjects.

This endearing image taken in 1953 of mother and child, has become a classic example of Erwitt’s humanist tradition, captured in black-and-white photography. This is not just any mother and child, but his first wife and baby, along with their household cat. The background is vacant, with only the bed and side wall in the lens’ view, emphasizing the objects Erwitt finds most important in his life. His wife is positioned at the bottom right edge of the bed, with her chest draping over, gazing lovingly at her newborn child, who is lying beside her. Both mother and child appear to be staring directly into one another’s eyes, cherishing this everyday moment that is experienced by most parents and their offspring. We can see the cat to the left, peering over at their owner, in complete tranquility, almost as if they are guarding over them. Erwitt’s mastery over this ’emotional balance between the personal and universal’ allows viewers to form personal connections with his works, often times seeing bits and pieces of themselves reflecting back.

The Following Label Was Written By Jonathan Anderson:

Born in France, Elliot Erwitt and his family emigrated to the United States when he was nine. As a teenager, he became fascinated with the American film industry, and in 1948 he moved to New York to study photography. Ultimately, Erwitt traveled to Europe and in 1951 he was drafted into the US military, but was able to use his training as a photographer for the Army Signal Corps while he was stationed in Germany and France. Once he returned to the US at the end of his service, Erwitt focused on his art, producing a myriad of photographic collections, including studies of couples, documenting the city of Pittsburgh, and even a series on dogs. According to Erwitt himself, “I’m serious about not being serious.”

Mother and Child features Erwitt’s wife, Lucienne, his first daughter, Ellen, and his first cat, Brutus in their small Upper-East Side apartment. Ellen was just six days old when Erwitt took this photo. For Erwitt, this was just a simple family photo, but it became one of the most widely reproduced images of its time. Mother and Child was first featured in the 1955 photography exhibition, Family of Man, at the Museum of Modern Art.

Even years later, people often ask Erwitt’s children which sibling is the baby featured in this photo. Misha Erwitt’s canned response to that eternal question has always been, “I don’t pose in the nude. It’s my sister Ellen.” While this photo is a remarkably intimate portrait of Erwitt’s beginnings as a father and husband, his marriage to Lucienne would not last. They divorced seven years after the photo was taken