New York City is perhaps one of the most famous and fetishized locales. It is the site of Law & Order, the star of Jay-Z’s hit single “Empire State of Mind,” and one of many heroines in John Ashbery’s long poem, Flow Chart. So what’s the big deal?

This course will explore (and write about and through) a wide variety of different New York “texts.” We will begin with E.B. White’s notion that “on any person who desires such queer prizes, New York will bestow the gift of loneliness and the gift of privacy” (Here is New York).  Together, will we then explore various landmarks (literary, cultural, and countercultural) of the city—from Samuel R. Delany’s Times Square to Jay-Z’s Bedford Stuyvesant, to Hart Crane’s Brooklyn Bridge. Other possible sites/subjects for discussion include: buildings/building the city (Frank Lloyd Wright, Vito Acconci); graffiti & public art (Basquiat, Wild Styles); and crime & gentrification (Gladwell, Rudyland, Robert Frank’s photographs). 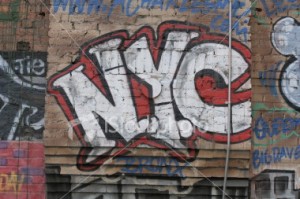 Through a wide variety of readings and writing assignments, a focus will be placed on the connection between ideas, place, and human culture.   This course will emphasize both the process and product of academic writing through in-class writing assignments, weekly response papers, rough draft workshops, self and peer edits, and individual conferences with me.