Reading the book Passing really put things in perspective for me a lot of passages in the book really stuck out among reading the novel. Although The film adaptation of the novel is fairly it does not grasp the different themes of the novel to justice. In the novel we get to see the characters’ thoughts and deeper feelings whether it be Clare, Irene , or Brian their thoughts and dialogues are what helps build the different themes of the novel. A single passage that stood out is when Brian Redfield and Irene Redfield are speaking about Clare’s ‘Passing’ as a white woman. As Irene is speaking on how people both accept and look down on ‘Passing’ Brian states “ Instinct of the race to survive and expand” this line stuck to me because it opened up a conversation that many did not notice in the novel. What does Brian mean by survival and expansion? It seems as if Brian is speaking from experience. My interpretation is that Brian has a strong belief that as a black person in America one has to have this mentality. The mentality of surviving and expanding is one that can be familiar to many black Americans during this time as oftentimes they suffered from inequality and racial violence.Expansion part can relate to the many African Americans moving from the rural south to northern cities and expanding the black community. I believe it is also important to note that Brian is a successful doctor with a great career and lives in a rather affluent neighborhood. I think it is also important to note that Brian hates his job and longs to move to South America to escape the racist reality of America. Brian’s instinct to survive is to escape the racism in America which he has grown to hate and despise, something that he even teaches his children about. Brian’s ideas about racism in America are very much compatible with those of the many black scholars and intellectuals who sought to expose the reality of America’s racism. Brian Redfield is black man with a solid career and has a fair amount of money and it seems as if he is guiding his children towards the same path in a way he is expanding his children’s knowledge of both the reality and truth of America’s past and the survival of the black race in the country. This idea brings me back to a selection in the opportunity magazine where it speaks of the National Urban League which is an organization that helped in the industrial welfare of African Americans in New York. 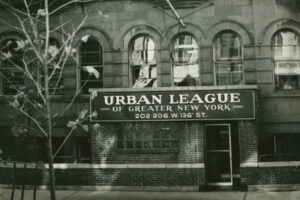 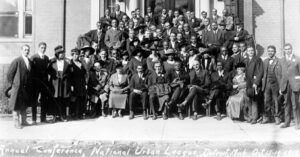 An organization such as The National Urban league had this idea of ‘survival’ and ‘expansion’ when helping black Americans and their industrial needs. In an article titled Organizational Adaptation: The National Urban League during the Great Depression by Dona Hamilton it speaks further about the NUL and its role helping black employees during the great depression. Dona states “the NUL concentrated on vocational education and the expansion of job opportunities for black workers in the private sector. Efforts to combat pervasive job discrimination were done on an almost caseby-case basis.” this reiterates my idea of what Brian Redfield meant by the instinct of the race to ‘expand’. Even though Passing is fictional in a real world aspect Brian Redfield would be a strong supporter of organizations like this and would participate in helping expand its ideals to other parts of the nation or even places like South America. These ideals of ‘Survival’ in racist america gave birth to a new culture and movement which was birthed in harlem. This is what Harlem Renaissance writers such as Alain Locke meant when he wrote his book The New Negro.