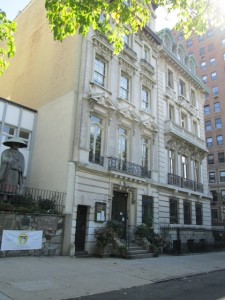 This two building complex at 331-332 Riverside Drive is the current home of the New York Buddhist Church, which has occupied the spot since 1955. Before that time, the congregation was located in a smaller brownstone building at 171 W 94th Street, which no longer exists except as play space for a large Mitchell-Lama apartment complex.

The congregation’s priest and founder, Hozen Seki, immigrated from Japan in 1930 and helped found two other Buddhist churches–one in California and one in Arizona. Traditionally, Buddhists worshiped at “temples,” but Japanese American Buddhist leaders adopted aspects of Christian ritual and some terminology in an attempt to make their faith seem less foreign to a public skeptical of Asian immigrants.

Seki was part of the Jodo Shinshu tradition of Buddhism, the most influential Buddhist tradition among Japanese Americans in the early 20th century, and he came to New York in 1938 to establish the first Buddhist church in the city. Just four years later, American authorities arrested Seki and placed him in a wartime concentration camp (or “internment camp”). Although Seki lived outside the West Coast, he was subject to internment because officials considered non-Christian Japanese religious leaders, especially Issei, inherently suspicious. While Seki was in camp, his American citizen wife Satomi Seki continued to live in and manage the Buddhist church at 171 W 94th Street. Japanese American resettlers in the city and Japanese American soldiers on leave there also helped build the congregation even in Hozen Seki’s absence.

After Seki returned to New York in 1945, his congregation thrived. In addition to Japanese American resettlers and oldtimers, Japanese “warbrides”–and sometimes their non-Japanese husbands–flocked to the Buddhist church. Hozen Seki’s son Hoshin recalls that his father and two other Buddhist ministers founded the American Buddhist Academy in 1951 to help enhance the future growth of Jodo Shinshu Buddhism among the American population as a whole. “My father began conducting classes, inviting prominent Buddhist scholars to lecture, and developing seminar programs,” he notes, and eventually the academy and congregation outgrew the space at 171 W 94th. In 1955, the academy and church moved uptown after purchasing a building at 331 Riverside Drive and the adjacent vacant lot at 332 .

In a strange coincidence, 331 Riverside had in the 1920s been the New York home of Marion Davies, an actress who was publisher William Randolph Hearst’s mistress for many years. On the West Coast, Hearst’s newspapers were some of the most outspoken and vehement opponents of Japanese American rights in the prewar and wartime era. (The building two doors down, 335 Riverside Drive, was briefly home to India Centre in 1930 before that venture folded.)

As the new Buddhist church rose at 331-332 Riverside, Japanese businessman Seiichi Hirose donated to it a large bronze statue of Jodo Shinshu founder Shinren Shonin. The statue originally stood outside a temple in Hiroshima and withstood the atomic bomb blast there. Hirose and Seki hoped the statue’s relocation would caution New Yorkers against any future Hiroshimas. 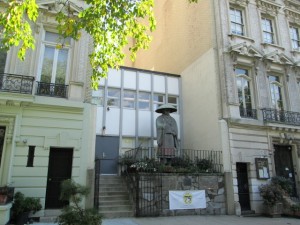 Seki naturalized in 1957 and retired to Hawaii in 1983. He died there in 1991, at the age of 87. The church he founded continues to serve both Japanese American and other Buddhists and is celebrating its 75th anniversary this year.

Sources for this post include The New York Times, Hoshin Seki (livingdharma.org), and Buddhadharma.org.

This entry was posted in Japanese Americans, Manhattan. Bookmark the permalink.