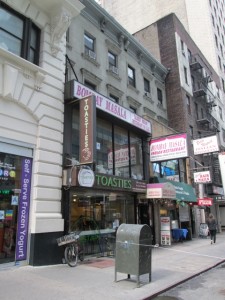 This late 19th century tenement building in the Times Square area is today home to the Bombay Masala restaurant, which claims to be the “Oldest Indian Restaurant in U.S.A.” Is the boast justified? In a way. Bombay Masala sits on the longtime site of the former Ceylon India Inn, one of the first Indian restaurants established in New York City. Founded a few blocks away in 1915, Ceylon India Inn relocated to 148 West 49th Street by the mid-1920s. It served meals to many of the South Asian workers who lived in boarding houses in the area, as well as to two generations of inquisitive New Yorkers..

Ceylon India Inn’s owner was K.Yaman Kira, who was born around 1884 in Kandy, a city in what is today Sri Lanka. Originally a Kandyan dancer, he toured the United States in 1904 and then returned in 1909 with another Kandyan troupe, which often toured with American circuses. Kira and the group even lived for a time in Bridgeport, Connecticut, home of the Barnum and Bailey Circus when it was not on the road. In 1913, Kira married Elizabeth Eckhard, herself an immigrant from Germany. Perhaps marriage prompted Kira to give up dancing, settle down, and start a restaurant.

What set Ceylon India Inn apart from the other Indian restaurants in New York at the time was that it rapidly developed into a sort of community center and meeting place for South Asians in Manhattan. According to historian Vivek Bald, the Kiras offered temporary shelter to Ceylonese sailors who had jumped ship, while in the restaurant, “Indian seamen shared space with political exiles and students from the subcontinent” (126).

Yaman Kira was anything but dogmatic, opening his doors to just about anyone who wanted to celebrate something. The founding banquet of the India Independence League of America took place at the Ceylon India Inn in 1930, as did the unveiling the same year of a suggested Indian national flag. Kira was a Buddhist and held celebrations of Buddha’s birthday, but the restaurant also hosted a memorial for the founder of the All-India Moslem League.

By the 1940s, however, most functions connected to Indian independence had moved to the Rajah Restaurant a block or so away. Perhaps the Ceylon India Inn was too small, or its owner too tolerant of just about every view. Perhaps his attendance at a 1936 memorial for King George V unnerved backers of Indian independence. Whatever the case, the Kiras’ restaurant remained, if not a political center, than at least a culinary destination. The Kiras sold the place to a Benghali restaurateur in the 1950s and retired to Long Island. Yaman Kira died in 1961, while Elizabeth Kira passed away just a few years later.

This entry was posted in Indian Americans, Manhattan. Bookmark the permalink.