Article and Photos by Kenneth Sousie

During the Mexican celebration of Día de Muertos, people gather to remember their dead. And for some, in this age of cultural appropriation, remembering the history of the celebration is just as important.

Every year at the end of October, St. Mark’s Church in-the-Bowery in the East Village hosts Mano a Mano’s Día de Muertos Festival. Mano a Mano is a New York-based non-profit dedicated to celebrating Mexican culture by “promoting the understanding of Mexican traditions among immigrants, artists, educators and the general public.” 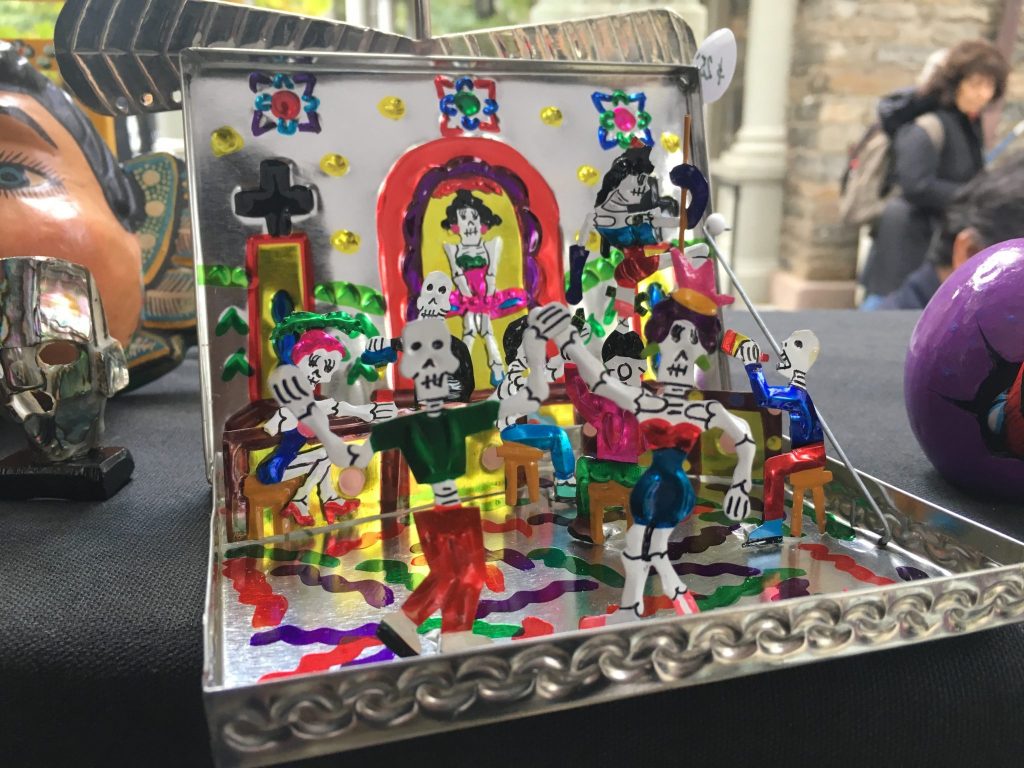 At the Mano a Mano marketplace, visitors can purchase Mexican folk art handcrafted by people indigenous to Mexican culture.

This mission flourishes when hundreds of participants come to watch, participate and remember their deceased loved ones at Día de Muertos every year. From noon until 6 p.m., attendees can participate in the assembly of a ritual altar, experience a marketplace full of crafts made by the indigenous peoples of Mexico, and become familiar with Mexican folk music through live performances.

According to Juan Aguirre, the executive director of Mano a Mano, understanding the history and tradition behind Día de Muertos is the most crucial part of appreciating the imagery. He has made it his mission to deliver the most honest Día de Muertos experience possible. But in the early days, it wasn’t easy.

“When we started, we were one of the first in New York. There was a festival going on in Staten Island, and another in Manhattan put together by dancers at the Museum of the Native American,” Aguirre said.  “I reached out, but nobody wanted to have us. It was difficult. They thought it was witchcraft.”

Finally, a member of St. Mark’s Church in-the-Bowery who was familiar with the meaning behind Día de Muertos invited Mano a Mano to host the festival on their grounds in 1974.

“People from around the world, when they learn, they have a deep connection,” Aguirre said.

During the celebration, an ofrenda is constructed. An ofrenda is a an altar of offerings to the deceased. These offerings are often comprised of the things that the deceased loved while they were alive. Food, spirits, objects, and photographs are placed in memory. 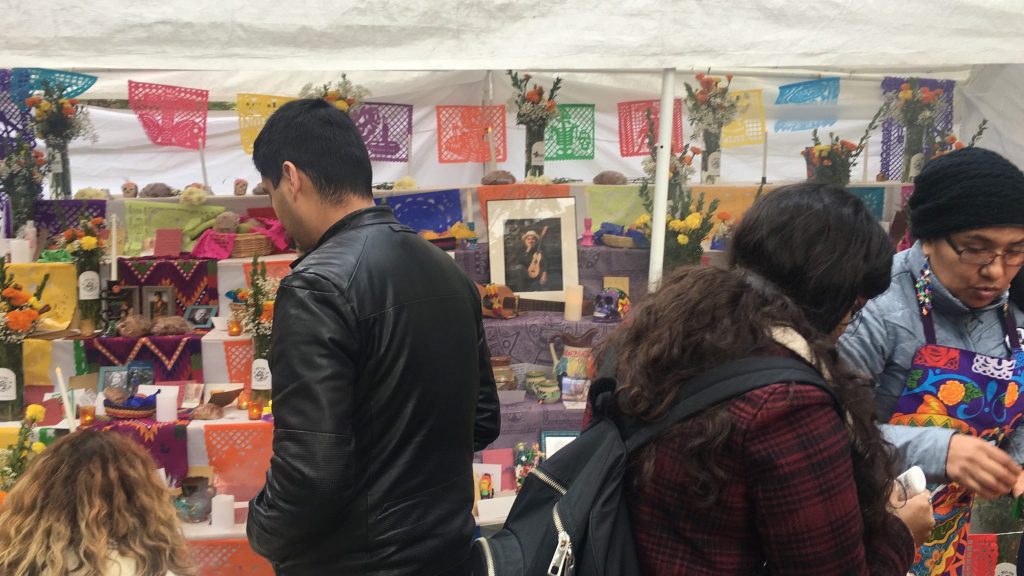 The festival features an authentic ofrenda, free for public use, welcoming all to participate.

“Día de Muertos is history; a time for remembrance,” Aguirre said. “In the United States, we have Memorial Day. Día de Muertos is like that, but we remember everyone. It is like a Thanksgiving banquet. Everyone brings something to the table, and we enjoy what our loved ones enjoyed.”

Thanksgiving and Día de Muertos have something else in common: something much darker. Much like the mass eradication of the culture of indigenous Americans by European settlers, Día de Muertos was heavily changed as a result of colonization.

“Día de Muertos has been heavily Christianized,” Aguirre said. “For centuries, Día de Muertos was celebrated for 40 days and when the Spanish came and destroyed Mexican culture, they established Christianity and tried to get rid of Día de Muertos. This was unsuccessful, and the Mexican people and the Spaniards came to a compromise. They said ‘You can celebrate this, but only if it is accordance to our Christian calendar,’ so 40 days became one day on November 2: All Souls’ Day. However, some Mexicans celebrate from October 28 to November 2.” 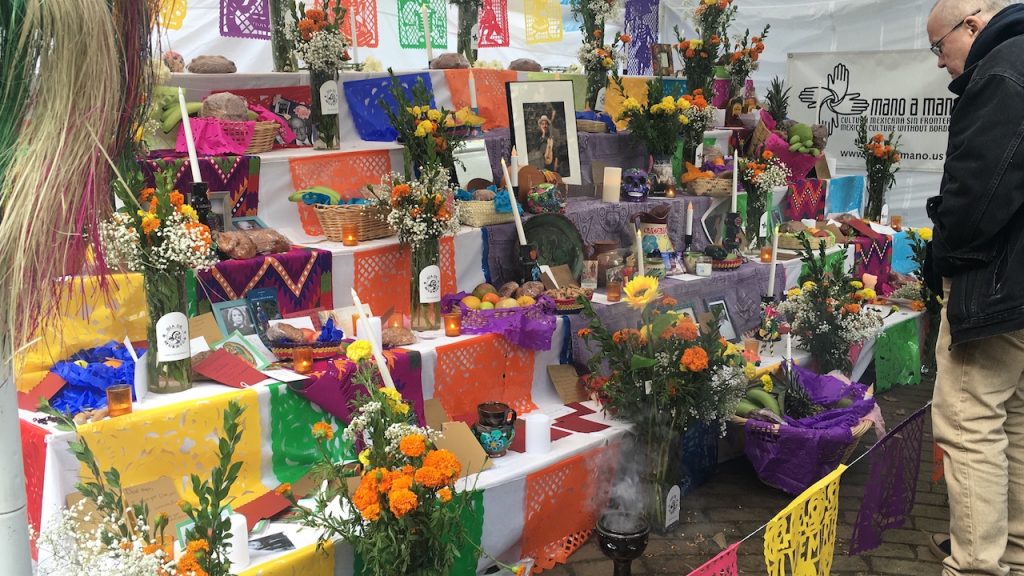 Among the photographs and letters to the dead are Son jarocho musician Andres Flores. Above, a card reads “death does not keep you and I apart” (Not pictured)

Sugar skulls, a popular image associated with Día de Muertos, also have roots from an indigenous Mexico. Early ofrendas were decorated with skulls, a practice predating the arrival of Christianity, and a practice that miraculously survived the transition.  The role of music plays a prevalent part in the celebration as well, mainly Mexican folk music. Like everything else in the ofrenda, the music is chosen in accordance with the tastes of the departed. 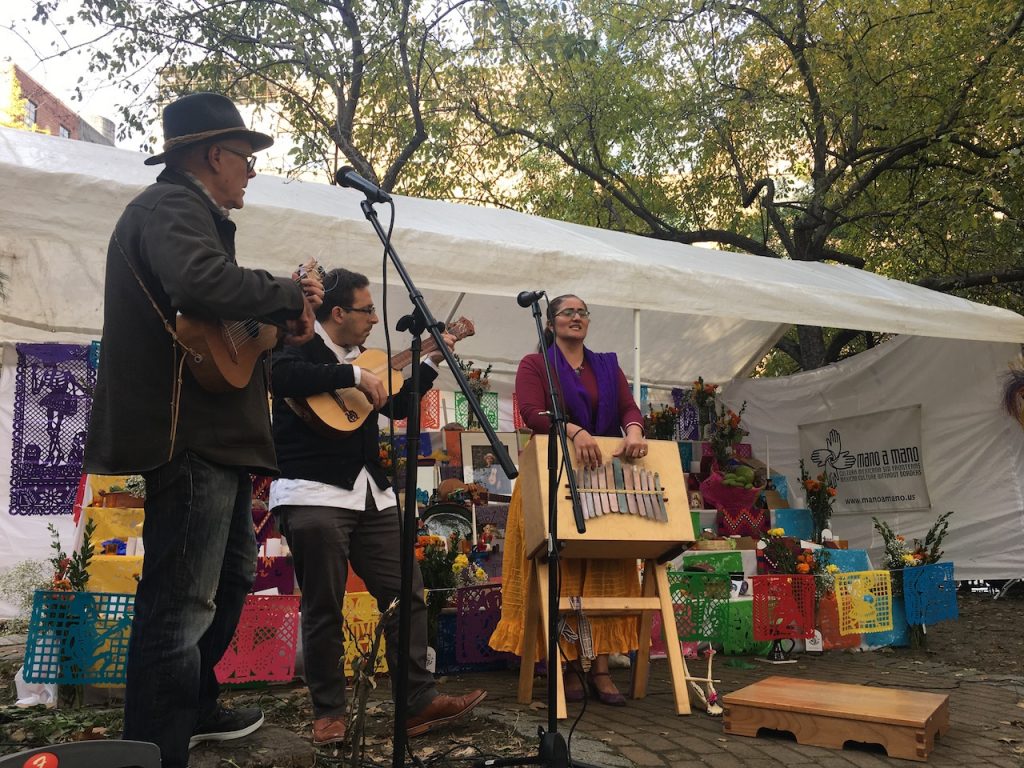 “It’s like apples and bananas; no way to compare. The skulls, the iconography are similar but the two celebrations are very different.”

Unfortunately, Día de Muertos being a popular “item” for the United States’ Halloween celebration has made the celebration a victim of cultural appropriation. As Día de Muertos’ popularity rises, the opportunity to use its imagery to make money rises with it. Festivals here in New York, such as the Día de los Muertos midnight party cruise this Friday, offer DJs, alcohol, and costume contests with cash prizes for anyone over the age of 21—but no ofrenda. You can walk into a costume shop and find a Día de Los Muertos mask and see a “Made in China” imprint on the item.

Aguirre sees this and has made it his mission to celebrate Día de Muertos through cultural integrity and authenticity.

“The thing about these events is that some are community, and some are commercial. Cultural appropriation is when people are taking advantage of someone else’s culture for a profit. We do not do that. Culture is very important. Our celebration is educational, including a folk art market, local vendors with crafts by local Mexican vendors, as well as crafts from indigenous Mexicans.” 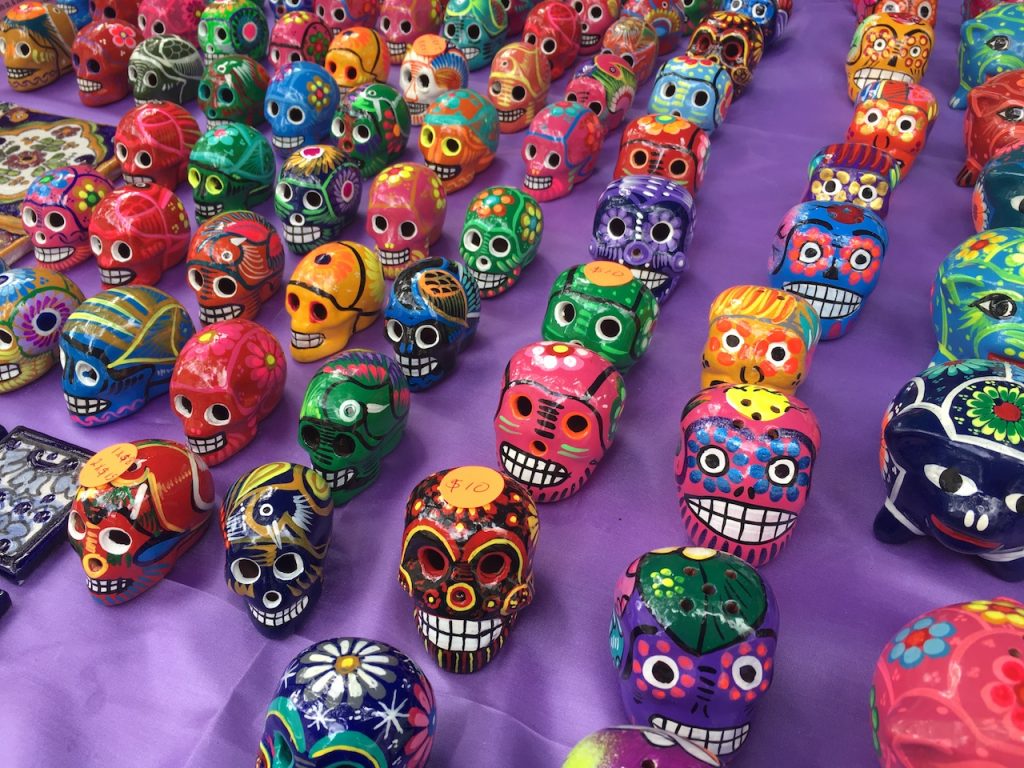 Above all, Aguirre makes sure that there is a public ofrenda at the festival, which after all, is the most important piece of the celebration.

“We have an ofrenda for people who cannot have one at home or who just want to be around others, so they can place pictures of their dead on it. These days our ofrenda carries around 300-400 pictures—people of all backgrounds, not just Mexican.”

With this public ofrenda, a place of celebration is also a place for healing.

“It is very emotional,” he said. “People cry. Some people say thank you, thank you for the ofrenda. It is a way for many to deal with their grief. People come, they laugh, they cry, they enjoy, and they remember.”

This year’s festival was pushed back two days due to inclement weather and ended up running from October 28-30. Mano a Mano is hosting two more Día de Muertos events this week, including a workshop on Friday at the Museum of the City of New York and a cultural celebration on Saturday at the Museum of Natural History.